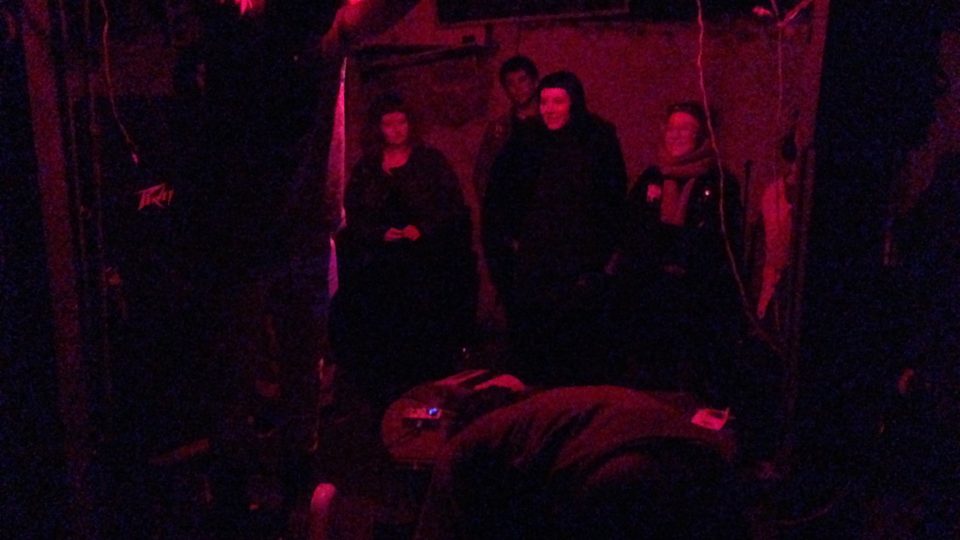 Following the conversation of the most recent Home is Where the Art is about venues and their atmosphere, this installment includes a venue that I’ve never been to before: at least not for a show. The music that night was of industrial, electronic, goth, and noise bands.

My descent down the stairs was dark, until I entered the basement which bathed me in red light. An increasing number of people stood in front of the stage area.  J. Heuermann, who creates many flyers for the punk scene in Iowa City, performed first.

I had never heard a noise band before that night. It was a new experience, and a pleasant one at that; though I admit, it felt confusing at first. I initially thought issues with the sound system blared through the speakers. After the show ended, I realized the “issues,” were the music. After the fact, I appreciated it, even if it didn’t match my desire to dance (which is constant).  J. Heuermann’s set lasted only a few minutes before the crowd headed back outside to wait for The Inheritance.

The Inheritance: a self-proclaimed industrial, new-wave, and electronic band out of Chicago.

The heavy sound of this band was different than the other electronic music of the night, mostly because they were the most “conventional.” However, the electronic aspect is present in their music. I felt that a basement bathed in red light was perfect for their sound.

Once outside again, I stood by myself, looking at my phone and feeling a bit awkward. I wasn’t feeling incredibly outgoing. The majority of the people huddled together in small groups, likely trying to get warm. It was freezing, and the fire had died out. This was a different feeling than I have had at other shows. Whether a result of my being shy, the space, or the small amount of people that I knew there, I don’t know and attributing it to one thing would be difficult and unfair.

Last for the night was the band Heavvypetting, which I loved. The band included the host for the night, Jack Dugan, and, and Paul Osgerby. During the performance, Jack Dugan hit a plastic bucket onto some floor boards on the ground, painted with symbols.  This produced one portion of their sound, which was something like an electronic noise band. In addition to the plastic bucket, their set included a step stool and sound board. Paul drummed on the step stool while the electronic beat from the sound board played in the background.

Their sound was something like an electronic noise band, which is unlike anything I’ve heard before. The performance of their set has to be seen while heard, considering the creation of the noise is art in its own way.

The short set ended and we all meandered into the cold for the last time. A lot of groups stayed to talk and sit around the burned-out fire, which stood as a symbol for the dying party as people ventured into downtown Iowa City. I left shortly after talking to a few people about the show and the others that were upcoming.

Though the house shows in Iowa City typically feature relatively similar audiences, a new space, of which I’ve never been, can cause a sense of anxiety and exclusion. I believe this is simply because I don’t know the details and “rules” of the venue. I didn’t really know what kind of music I should expect. I do admit that I am usually relatively nervous attending any house show, or any concert really.

However, considering my increased anxiety over a brand new venue, perhaps the same theme from my first installment of Home is Where the Art is persists: the idea that the literal home is a factor in the level of comfort. I already stated that the privacy of a home causes anxiety in an extremely social situation, like that of a show, but maybe it’s exacerbated by the frequency of attendance at the venue.

I left feeling thankful for the exposure to new styles of music and facing a crowd of mostly acquaintances. Perhaps, the courage to meet new people and venture outside of your comfort zone is the first step to being inducted into a scene or venue.

Unfortunately, two out of the three bands mentioned are rather unknown, as well as unconventional; I cannot provide links for you to listen Heavvypetting or J. Heuermann. I believe that simply listening is not enough anyway. The performance is incredibly important. However, J. Heuermann was featured in Little Village about his flyers, and you can check out that interview here.

The featured photo was taken by me, at this venue, and shows Heavvypetting’s set.