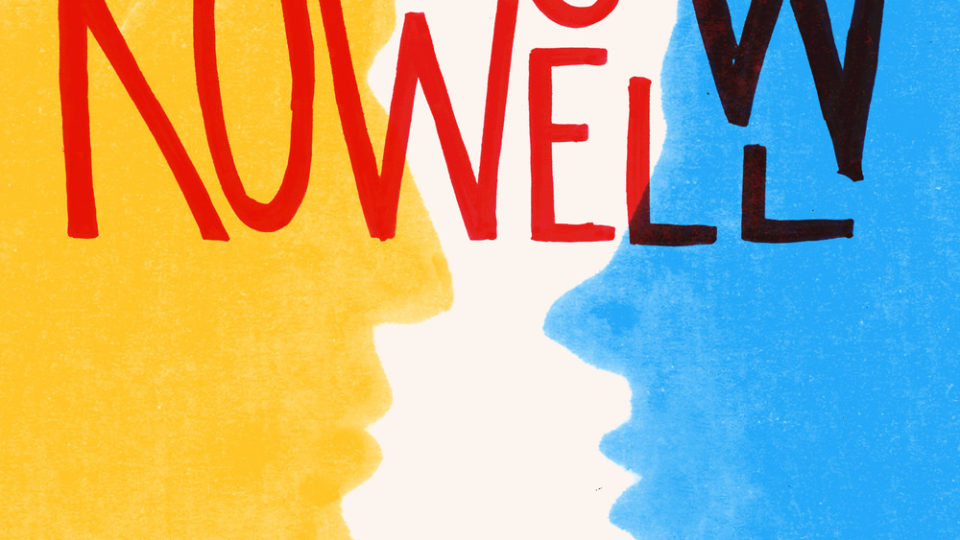 Carry On by Rainbow Rowell. It’s got a pretty generic, faceless title, evoking memes, friendly encouragement, or the pleading tenor of Freddie Mercury in “Bohemian Rhapsody”. So what’s it about, you ask me. What could a book with that plain of a title be about? Well, I hope you’re ready for this: GAY HARRY POTTER.

For some, that description alone would be enough to have them running to their locally-owned and chain bookstores to purchase this novel, with its girth of nearly 600 pages and its eye-catching cover art. Be still, my AU (alternate universe, a phrase used in fan fiction) heart. However, for the nonbelievers, I’m willing to be a little more persistent and convince you to give this gem a fair shot.

Rainbow Rowell has a been a fixture within the young adult genre for a couple years now, thanks to her breakthrough bestseller Eleanor and Park: a sweet, intelligent, and bitter novel about an overweight outsider and a vaguely popular Korean boy with a love for comics falling into the confusing and enrapturing throngs of first love. Her follow up, Fangirl, while not met with as much commercial success, was still received with critical acclaim. Focusing on a young woman named Cath starting her college career as a creative writing major and facing difficulty moving away from her works of fan fiction to more original material, Fangirl acutely observed the inner anxieties of a talented writer finding her niche in her work and in her life. More importantly, however, the novel introduced two fictional characters that the protagonist wrote about, named Simon and Baz, about whom readers were dying to read more.

However, this demand for more Simon and Baz left the author in an interesting situation. You see, Simon and Baz are characters that existed within a book series within Fangirl: Cath wrote fan fiction about “The World of Mages”, a famous book series that, on the surface, sounds very similar to our own magical boarding school series, Harry Potter. So in Fangirl there were TWO stories involving Simon and Baz: the canon “World of Mages”, and Cath’s fan fiction about them. So, instead of writing either of those stories, Rainbow Rowell decided to write the “World of Mages” as she would have written, arguably writing fan fiction for a series within her own novel where the protagonist writes fan fiction as well. I know, it’s all very meta. And, on paper, it sounds like a complete mess.

So Rainbow Rowell should be commended for how well she’s able to pull it off.

Carry On begins as Simon Snow, our main character and Chosen One, the most powerful Mage in the world, is headed for his final year of training at the Watford School of Magicks. Needless to say, he’s feeling a little anxious about it: he’s going to be stuck with his roommate Baz again for another year (Simon is convinced that Baz is a vampire), there’s a prophecy that the head of the school is pressuring Simon to complete, and there’s a nasty creature that looks like an eleven year old Simon running around and sucking the magic out of areas of Europe, creating pockets of dead air where mages can’t use their abilities. It all sounds like a lot to unpack, as Carry On is kind of an alternate universe to Harry Potter and the Deathly Hallows, and at the beginning of the novel it’s a little alienating for the reader. But once Rowell figures out how to unpack all that backstory and is able to introduce the other lead characters, Carry On hits the ground running and keeps its addictive pace going until its rousing conclusion.

Part of the reason Carry On is able to work past its issues and, ultimately, step out of the shadows of its obvious inspiration, is because of how talented of a writer Rainbow Rowell truly is. Although she is frequently compared to John Green, I would argue that she is an infinitely stronger writer: she has an ear for witty, hilarious, and heartfelt dialogue that doesn’t feel staged, she knows exactly when to throw an emotional gut punch or plot twist, and her characters are three dimensional, lovable cast members, even if their archetypes are lifted straight from classic fantasy (i.e., Simon’s best friend, Penny, starts out as a Hermoine Granger stand in, but quickly becomes a feminist witch fighting for equal opportunity for mages of all races, colors, and sexuality who I would actually prefer to have by my side over her counterpart). Rowell is also really fantastic at creating tension in situations, whether they be of the personal or more epic variety.

That’s another reason why Carry On excels and becomes, in my opinion, one of the best things to come out of the young adult fiction genre in a long time. While the novel certainly has its magical plot to resolve, Rowell loves her characters, and they drive the narrative instead of being dragged along by it. Because of this attention to character, to their personal traumas and explorations of identity, she’s created a truly subversive version of the “Chosen One” literary trope: Simon is someone who doesn’t want the power he has and is dealing with his bisexuality; Baz struggles with being a pariah within his own family even though he didn’t being his differences onto himself; Agatha, the seeming damsel in distress, discovers her own agency and is decisive in a way that most other characters, in any fantasy setting, wouldn’t be able to bring themselves to do.

And don’t even get me started on the kissing scenes. I was literally hugging the novel and giggling over it. Don’t underestimate Rowell’s ability to evoke the reader’s own memories of first love.

Despite these strengths, Carry On does sometimes buckle under its own ambitions. The world simply cannot be as fleshed out as other fantasy projects: she didn’t have over fifteen years to develop it, after all. And while its breathtaking pace is mostly a positive, its conclusion does come a little too quickly and tidy. But for a novel that gets almost everything else right and, along the way, changes the game of young adult fiction, I believe those offenses can be forgiven.

A goofy, subversive, and fantastical treat.