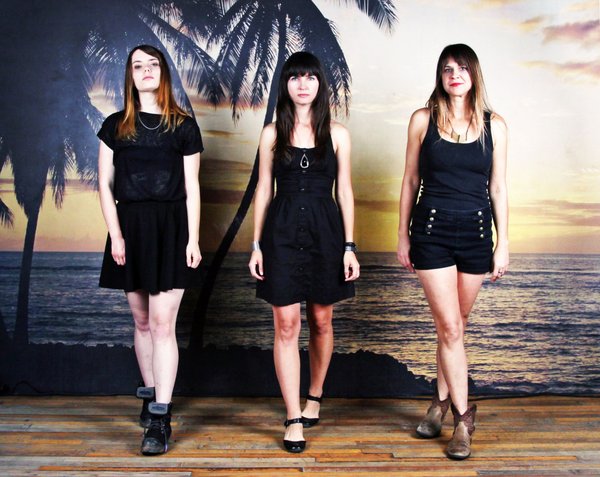 For those of you who love quotes or Neil Gaiman, there’s a great phrase that inspired a Zen Pencils comic a while back: Make good art. If you click the link, you’ll find the entire meaning of those three words laid out with context, but I’ll paraphrase. The idea is, when something in your life is giving you those pesky, negative emotions, you can take control of those bad experiences by turning them into art. The reason I bring up Mr. Gaiman’s advice is because this album I’m about to review? It came about from some pretty dark events.

Moving Panoramas, from Austin, TX, released their debut album back in early October, but the terrible incident that sparked the formation of the band occurred way back in 2011. How terrible? Lead singer Leslie Sisson and her boyfriend were victim of a burglary, where the invader (who was high on narcotics at the time) held the both of them at gunpoint, forced them to take PCP, and eventually kidnapped the both of them. Sisson and her boyfriend escaped at the gas station, where they were able to call the police. Sounds like a good recipe for PTSD to me!

As a way of coping with the experience, Sisson began to follow the advice I mentioned earlier: make good art. Moving Panoramas is Sisson (guitars, vocals, songwritier), Rozie Castoe (bassist), and Karen Skloss (drums), and their debut album is One. And it’s pretty good, especially if you like Best Coast and the Dum Dum Girls. There are ten tracks, and I’ll go through them one at a time.

The title track immediately lets you know what kind of band this is. The opening riffs immediately get you pulled into the song, and though the instrumentation and lyrics may be simple, they’re also straight-forward. No fancy tricks, no showing off, and–most importantly for me–you can actually understand what Sisson is saying. A lazy vibe, this song is a great start to the album.

First off, there’s a pattern in the track titles: each title is a single word, which is perfect with the name of the album.  Is this a pattern the band will continue? Will their second album be “Two,” with every track being two words long?  Don’t let me down, Leslie. “Radar” is slightly slower than the track preceding it, but I think this serves the vocals well. While Sisson is no Adele, the chorus has a crooning feel as she approaches a higher register. A good love song.

The third track definitely sounds like the kind of “band getting together, have a jam session” song that cool bands have. And by that, I mean I DARE you to listen to the guitar opening and tell me it doesn’t sound like Blue Oyster Cult’s “Don’t Fear The Reaper.” You totally hear it now, right? I’m not making things up. The vocals are completely different, however–the song is about Sisson wanting to stay with someone for at least the night, but she’ll leave if you really want her to. She’s cool either way, but she really would like to stay the night. A simplistic premise, but looking at the crap she’s been through… oof. A darker song, but still plenty chill.

Sisson has this echoing quality in her vocals, making for a very “dreampop” feel. This is prominent in “Always,” a song where the guitar is more diminished while Sisson sings “Let’s never wake.” I wouldn’t call it my favorite song off the album, but it has its own sleepy charm that I can’t help but appreciate.

Solid guitar opening, ethereal opening vocals, not much about this song I don’t like. Well, it’s very repetitive and kind of boring. Aside from that though, it’s a nice track.

The guitar and drums definitely have a 60’s era influence, with a beat that marches along like….okay, I’m never going to beat that Blue Oyster Cult comparison.  Combine that with Sisson’s dreamy vocals and simplistic lyrics, and you have a perfect song for whatever the kids are smoking these days.

I really like the opening guitar for this one. Sisson also takes to her upper register for the chorus on this track, which adds to the diversity of the song. Slightly more uptempo than the last song, “Word” isn’t one of my absolute favorites, but there isn’t much I dislike.

Slow like “Magic,” and has all the bite of a soggy paper towel.  I get that “dreampop” is what the band is going for, but this is a bit too literal for me with Sisson’s quiet, sustained notes and the soft guitar.  Something more uptempo, please?

Thank you. “Believe” was written shortly after Sisson’s kidnapping ordeal, and the lyrics reflect that, the opening lyrics being “Try to lock the windows tight.” There’s an air of sadness that permeates the song, and the lyrics reference keeping things “make-believe.” To me, this is a song about fear, a regret about past events (did I mention that Sisson was kidnapped from the house her mother had died in earlier that year?), and the desire that those tragedies never happened. Despite the darkness of the song, I like it a lot for the melancholy emotion it brings with it.

The final track of the album, with lyrics that sound like they were inspired by a dream–not surprising in the least.  A nice track to end the album on, with a soothing atmosphere and Sisson’s vocals coming across as a soft murmur during the verses. It may run a little long at over six minutes, but I really like the lyrics towards the end that urge, “don’t let go” before the drums back out, and the song dissolves out.

A nice album with a compelling backstory and enjoyable vocals, the worst sin of One is that I feel it could use more diversity in its tracks. The songs can feel repetitive, but like the album I reviewed last month, the songs can stand up well on their own. There aren’t any tracks on One that I actively despise (unlike “Leather and Wood” from the Deerhunter album I reviewed, linked above), but there aren’t any tracks that hype me up (such as Deerhunter’s “Snakeskin”). Still, I could listen to the full album and appreciate the simplicity and emotion within both lyrics and instrumentation. Maybe they aren’t exactly like other girl guitar groups like the Dum Dum Girls or Best Coast, but Moving Panoramas definitely has its own sound that’s worth a listen.

You can purchase the full album off iTunes, or listen to the first track “One” below.