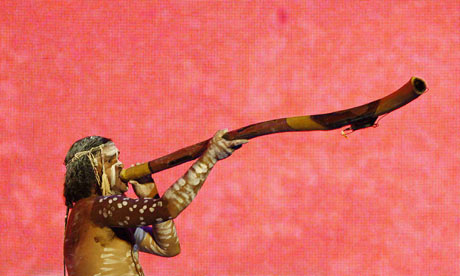 Compared to the first installment of What’s That Sound, the didgeridoo is more commonly known by musicians and non-musicians alike. Through my research, I’ve learned many interesting details about the history and cultural significance of the didgeridoo. Plus, it’s just an incredibly impressive instrument with a distinct deep sound.

The didgeridoo is one of the oldest instruments in the world, dating back thousands of years. It is known as the “sound of Australia” and is a central part of Aboriginal culture. The wind instrument is traditionally made out of fallen trees hollowed out by termites. Exquisite designs and patterns are painted on the outside to symbolize various aspects of a specific tribe, or simply to express beauty.

Differing tribal groups have many different names for the didgeridoo, such as: bombo, garnbak, Yirdaki, and many others depending on the region. A list of synonymous names as well as extensive history of the instrument can be found here.

Didgeridoos are an integral way to express Dreamtime in the spiritual lives of Aboriginal people. Dreamtime is the relationship between Human, Physical, and Sacred Worlds. Didgeridoo players spend lots of time studying nature in order to properly express animal and weather sounds with their instrument. There are common versions of kookaburra, dingo, and kangaroo sounds because of the prevalence of the animals in Australia.

Traditionally, didgeridoos may only be played by respected Aboriginal men in religious ceremonies. However, there is also an informal style of playing that is allowed for women and people outside of Aboriginal culture. Many didgeridoos sold to tourists are not authentically produced, and often the decorations do not have deeper symbolic meaning.

It is incredibly easy to find traditional didgeridoo musicians with a quick search on Google or YouTube. Legends such as Burragubba and Dargin defend the importance of didgeridoo music to Aboriginal culture.

With a bit more effort, I was also able to find several modern uses of the didgeridoo. Ganga Giri is a band from Australia who combines Aboriginal culture with multi-layered grooves. Their self-described goal as a band is to “create a unique tribal-technological deep earth dance experience.” Ganga Giri is basically a bridge between traditional didgeridoo music and the modern use of the instrument in Western psytrance tunes. I dare you to listen to the entirety of “Good Voodoo” without dancing. It’s impossible.

There are not many popular artists outside of Australia who regularly use didgeridoos in their music. Aphex Twin, a British electronic musician and composer, released an EP called Digeridoo in the early ’90s. The first track of the EP, also titled Digeridoo, is considered a techno classic. M.I.A., an English rapper, also incorporated the didgeridoo into a funky song called Mango Pickle Down River. The didgeridoo is definitely the most redeeming quality of the song.

If you didn’t get enough didgeridoo sound from this article, feel free to listen to ten more relaxing hours here.