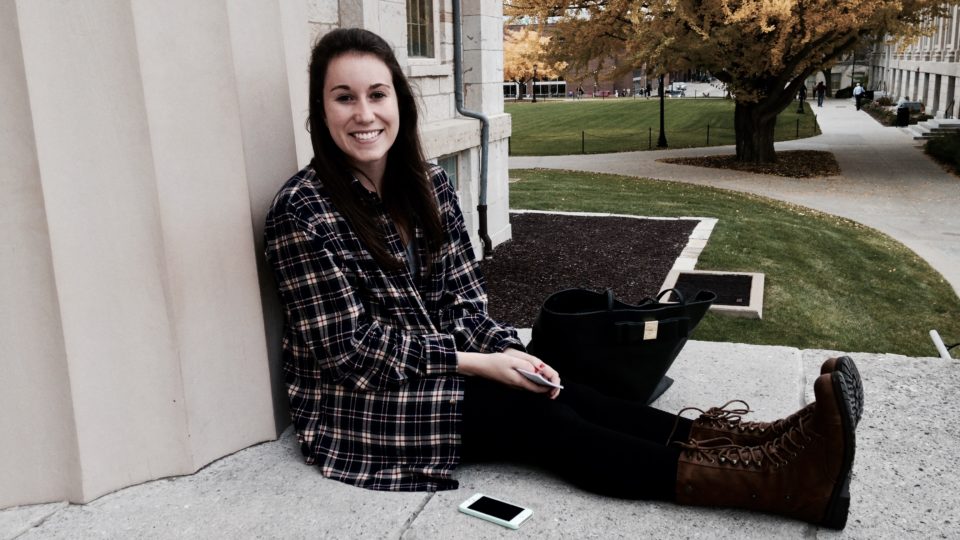 After experiencing previous trouble in finding people of Iowa City that were willing to be observed, I ventured out on this particular occasion expecting the worst. I imagined spending countless hours sitting upon the Pentacrest and years wandering the streets of IC searching for someone to speak with. I pictured angry, private people throwing stones and tomatoes at me, and perhaps even dogs chasing me away. What I did not expect to find was Megan.

Megan was the first person I approached on my adventure that day. I walked up to her fully expecting a curt “no,” or a cold shoulder, as I had experienced many times before. Instead, Megan was warm and receptive, and allowed me to share a tiny part of her time.

Megan and I obviously connected over the fact that both of our names are Megan. We also agreed upon the matter that people who spell “Megan” with an H are just crazy and need to rethink their world views. Get your lives together.

My short time speaking with Megan led me to believe that she was someone whom many University of Iowa students could relate to. She shared many of the same fears and joys that each of us encounter every day.

She told me that she was worried about graduating and fulfilling all of her class requirements. Megan was looking into graduate schools, both to continue her studies and to begin a life outside of Iowa City.

An existence beyond Iowa City is daunting for many, but especially Megan, who has called the city home for her entire life. Megan was born and raised here, and always knew that she wanted to attend the University of Iowa. She grew up here, learned here, and now is getting ready to move on to bigger and better things.

We talked a little bit about what it was like to transition to the University of Iowa after living in Iowa City for so long. Megan shared the same fears her first year that many freshman feel– she was nervous about finding classes, dorm life, and about meeting people she could connect with. Four years later, Megan told me that she felt glad that she had come here, and that she had met some of her best friends while living in the dorms.

Though Iowa City is Megan’s home, she is excited to start a new adventure. “I love Iowa City, but I always knew I was going to go to grad school out-of-state,” she told me.

Thanks for sharing, Megan, both with us and with Iowa City. Come back and visit sometime.