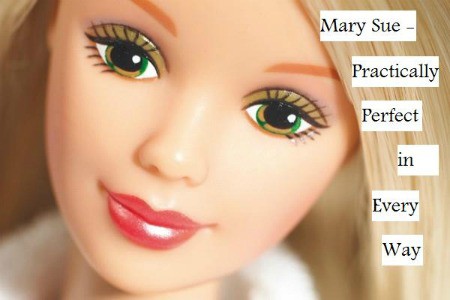 Iowa City. The famed Athens of the Midwest. I’ve heard many people say that the University of Iowa was built on the arts, and the Writing Workshop here is world-renowned. So is it any wonder that I, an aspiring author, ended up going to graduate school here? Well, kind of, since I’m in the biology department, but a girl can have multiple interests.  And one of those interests is not only writing, but sharing my personal tips and tricks with other fellow writers.  I’m by no means an English or Creative Writing expert, but I’ve been going at it ten or so years, and I’ve found plenty of resources that have helped me to progress to the level I’m at now.

For the purposes of this column, “Mary Sue Says,” I’d like to go by Mary Sue, like Abby of “Dear Abby.” Why Mary Sue, you ask me? Because the term “Mary Sue” is one of those concepts I believe every beginning fiction writer should know when they begin to develop their main character.

At first, “Mary Sues” were only applied to original characters in fan fiction, where it was obvious the character was meant to stand in for the actual author – simply a form of wish-fulfillment rather than a character any of the readers could really relate to. As of today, a Mary Sue can be a fictional character in any medium, not just in fan fiction.  However, an overt Mary Sue (or Gary Stu, for male characters) is often easily identified by several symptoms.

First, most Mary Sues are written to be the main character of the story. This means we have a lot of insight to their viewpoint, and their problems. In a fantasy story, there are a lot of awesome characters with really cool powers. But when a character starts becoming powerful beyond belief, either by breaking the laws of that fictional universe or by not having any truly challenging obstacles or personal flaws in their life, that’s when a character might be a Mary Sue.

For example, Harry Potter.  The Boy Who Lived is obviously a special person in his setting, but he has a number of enemies who try to get him killed – or worse, expelled! – and Harry often fails or screws up throughout the book series.  He’s by no means all-powerful, and we’re always reminded that he’s just a normal teenager who can use magic.  In the series, he’s not the smartest of his friend group. We often see him struggle in classes, or procrastinate on asking somebody to the school dance. That’s good character writing.

However, a character who is a master on the very first day they learn a skill, who nearly everyone likes except the one token villain, and who was practically perfect in everyway? That is a good character to avoid like the plague.  Nobody can be that perfect and be relatable, unless we find out later that they have more nefarious purposes in mind.

Another common Mary Sue tactic?  Sacrificing their life for the sake of the other characters (because they’re just so gosh-darned perfect), and then being resurrected because… the writer made it happen.  It trivializes the climax, and often doesn’t make the intended impact because the Mary Sue is so perfect and awesome and cool.  The problem is, when you have somebody who is impossibly cool as a main character, it’s hard for a reader to relate.  It’s why Frodo is the main character in Lord of Rings, not Gandalf.  Every main character needs to be relatable in some way to your readers – otherwise, nobody will want to finish reading it.

Mary Sues (or Gary Stus – again, this kind of character can be any gender, race, sexual orientation, etc.) are a common feature of beginning writers.  Nobody wants a dull, unlikeable main character, right?  But developing a character in any kind of fiction is a balancing act.  What makes it even harder is that there are so many reasons a trait works on one character, but makes another character turn into a Mary Sue.  It something that requires a lot of thought, as well as the ability to think not just as a writer, but as a reader.

I can’t list everything in one article, but if you want to know more, this link can help with some common traits of Mary Sue characters.  Check out the Mary Sue Litmus Test to see how close to the Mary Sue zone your own main character might be.  And of course, if you’d like to ask your own questions about writing characters, plot, etc., I’m always available at madwar_krui@yahoo.com.  Maybe it’ll even give me an idea for my next column!  Let me know what you think, and happy writing!