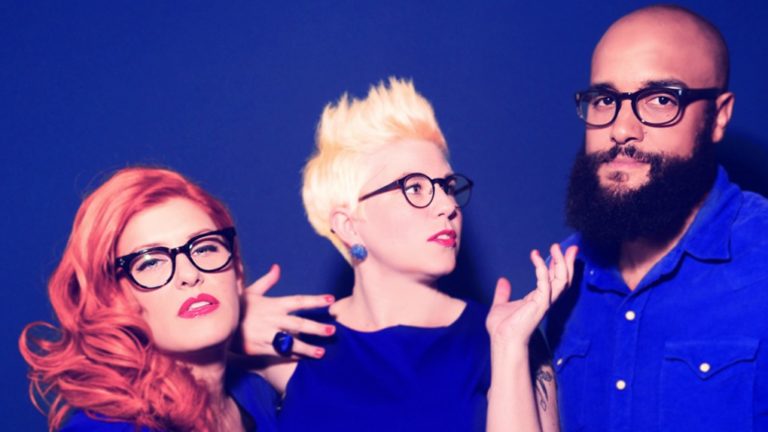 Pearl and the Beard released their final album Beast July 21st, 2015. Although it has been released for several months, the band is giving their last performance together November 19th. The New York City group formed eight years ago, have created beautiful music together, and are now ready to pursue their own separate interests in the musical world.

The band is a folk-pop trio comprised of Emily Hope Price (cello, keys), Jocelyn Mackenzie (percussion), and Jeremy Styles (guitar). All three are talented vocalists and musicians. They highlight one another’s musicality with solid harmonies and cultivated instrumentation.

They have released two previous full-length albums God Bless Your Weary Soul, Amanda Richardson and Killing the Darlings as well as an EP Black Vessel. The three best words to describe their sound are passionate, lamenting, and eloquent.

1. You
The album starts with a strong, “Can you hear me?” which grabs the listener’s attention immediately. This is a classic love song directed to someone who needs to know for certain that the relationship they’re in is solid. The band recently released a new music video for “You” in support of the idea “Love is Love.”

2. Again Animal
“Again Animal” was the first single released from this album, but it is not one of my personal favorites. It has a good driving beat and typical Pearl and the Beard harmonies. The best section of song is near the end, when the band strays from the original flow of the song.

3. Good Death
“So it goes, so it goes, so it goes. Quiet now this lump of heart.” This song is a great one to listen to during extremely stressful times. For college students, stress is quite common. But I also like how this song acknowledges how life moves on no matter what happens, even though there are extremely hard moments. I believe a good death refers to a beautiful relationship that deserves a gentle breakup. Although splitting up seems inescapable like death, this tender song pleads for an amiable end.

4. Burn Me Up (The Gordian Knot)
The Gordian Knot refers to an extremely difficult or involved problem. It would be easier to burn the knot than untangle it. The strongest lyrics of this song are: “You had my heart but it’s gone now. Like everything else, it’s gone gone gone gone now.” Sometimes we fall out of love, whether it be with a significant other, a friend, or even a hobby. Sometimes we need to figure out how to remove ourselves from extremely complicated situations. And often, we have no idea how. I really enjoy the groovy synth sounds throughout this song. There is a composure present that isn’t as prominent in other songs in the album.

5. Yet
If we are lucky, we can find people who love us despite all of our flaws. Even better, we can find others that we love endlessly. This acoustic, calming song exemplifies the vulnerable state lovers are in when they accept each other fully. The song is short, sweet, and sappy. It’s not an extremely groundbreaking melody, but it appeals to the comfort of a trustworthy partner.

6. James
Snappy snare drum, minor key, and suspenseful chords are all guaranteed to draw my attention. I was hooked by this song the first time I heard it. Trouble is, I only like the first half. The mantra “James, release me” starts to make me feel like I am being held captive by the song itself. That may be exactly the point because James is holding the narrator against her will. Nonetheless, I wish the song would end around four minutes (versus seven).

7. Devil’s Head Down
I liked Devil’s Head Down the first several times I heard it, but I have to be in the right mood to enjoy it’s brash electric sound. It’s a song I expect sounds much better live, just because of the quality of the instruments used. Jeremy takes the lead on vocals, which is rare and appreciated.

8. River
Water, like love, is one of the world’s most abundant and yet most complex things. We are made up of both, and we need each to function. River is an attempt to define a particular relationship’s version of love, though I do not find it extremely successful. I’m left with more questions than answers. The mystery makes me want to hit repeat and start my analysis all over again, but it’s also just a really soothing piece.

9. Take Me Over
Cello, drums, guitar, harmonies, passion. Ah, this is a Pearl and the Beard song. This song is a great tribute to the musical accomplishments the band had throughout the years. “See you when I see ya, maybe in about two years.” They make such intense music together that they need to take a break as much as they may not want to. Just as a romantic partnership that has reached it’s limit, a clean separation allows us to find ourselves again. Take me over no more.

10. Anything
Anything was definitely an experimental song for the band, with unclear lyrics and random electronic sounds. They developed the lyrics from a process the band mates call Mumblecore. Basically Jeremy would mumble nonsense syllables along to the melody before writing actual lyrics. The band decided to turn his mumbles into words for the song. They have proven that they would do anything for a sultry ballad.

11. Oculus
Oculus is a storybook of a song that follows a being known as Oculus. After some research, I learned that Oculus is Latin for eye. The Oculi in Pearl and the Beard’s world provide clarity, more so than the moon. We may not be interested in what Oculus offers us, but he provides us with information we need to know. My interpretation of the song could be completely wrong, but the song allows for many meanings. I picture a dark, dungeon-like scene when I listen to all the background jingles and noises. Acoustic piano can do no wrong.

12. Landmine
“Wait, wait, wait. Sweet ammunition. Please, please, please. Sweet ammunition. Amen.” I feel a sort of agony when I listen to this song, but I get it stuck in my head on a regular basis. We all know people that just have something about them that we can’t stay away from. We know it could and probably will blow up in our faces, but we wait and plead for ammunition. The strength of the electric guitar and the ever-increasing tension has me holding my breath. I’m anxiously awaiting the explosion.

13. Such a Fool
“You’ve got that wall up in your heart again, darling. Don’t you feel at home with me?” Even if the last song of their last album had been upbeat, I would have been an emotional wreck. This song breaks my heart. Especially the lyrics: “Oh I know what I should do. I know what you will do. Such a fool.” I highly recommend repeated listens for relationship problems causing despair or confusion. It seems appropriate to me that Pearl and the Beard ends their album on a sad, soft note. They had a great run, but they cannot tear down the walls preventing them from moving forward as a band.

Grade: A-
Listen to Beast here: