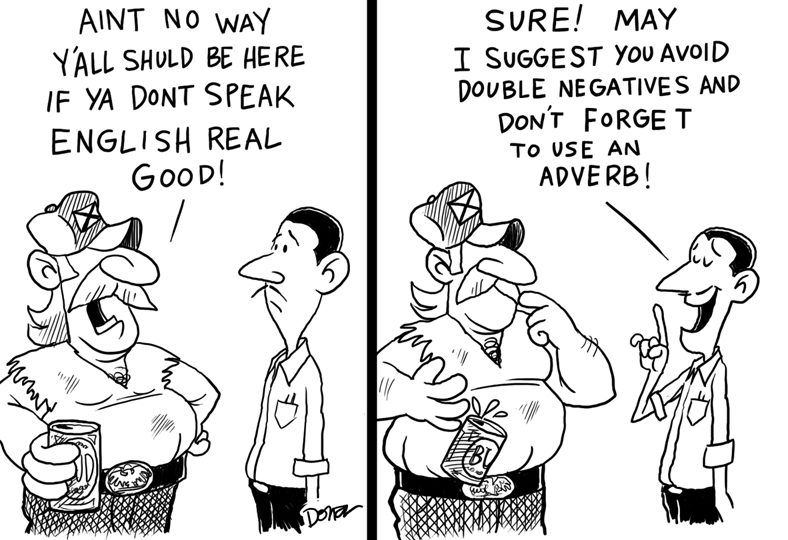 With Thanksgiving fast approaching, I find myself preparing for the inevitable familial interrogation. Every year, college students return home for turkey dinners stuffed with seasoned judgments. As they say, “All unhappy families are alike… they ask college students the same goddamn questions.”

Alright, maybe Leo Tolstoy said something a little different. But still, if he had to go through the intense questioning families put us through during the holidays, I think that he might have said this too.

“Where are you going again?”

“What are you majoring in?”

At this point in the interview, I brace myself. I expect the coming skepticism and warnings.

Before I continue with my rant, I would like to make one thing clear. I have a tremendous amount of respect for teachers. Behind every English major lurks a brilliant, supportive English teacher who encouraged her to cultivate a love of language. Educators deserve endless accolades and appreciation for what they do, and I will be proud if I do become a teacher someday.

However, I resent the assumption that the English major funnels its supply into a single profession.

Society assumes that the black hole of the technological era swallowed up practical English careers.

Even at the University of Iowa, administrators historically segregate humanities from the rest of academia. As most Hawkeyes know, the English-Philosophy Building (fondly named the EPB), feels like a prison. It sits stoically at the bottom of the hill, blatantly set apart from the Pentacrest.

Many people do not consider English a serious field. Most believe that the only plausible option for an English centered career lies in education. The options and jobs lie before the students of business, engineering, and math. Yet, contrary to popular belief, English holds her own against more “serious” concentrations of study.

An article in The Atlantic notes that adults studying liberal arts are not drowning in the job market. Data gathered by the Georgetown Center on Education and the Workforce found unemployment rates of recent humanities and liberal arts graduates around 9 percent. Though this seems high, unemployment for students with computer and math degrees fell at 9.1 percent, psychology and social work degrees held 8.8 percent, and social sciences had 10.3 percent.

The Georgetown Center on Education and the Workforce found the average rate of unemployment across all majors to be 7.9 percent.

I guess English isn’t faring too poorly on the unemployment spectrum.

I will concede on one point. Though the employment rates for humanity majors equal that of other majors, social sciences majors bring in the dough. A person should not go into English expecting to make bank.

However, a person should also not shy from this major out of fear of not finding a job.

If nothing else, proficiency in literature and writing means effective communication. People who have studied English and literature were trained in the arts of formal writing, proper speech, and argument, all of which are integral elements to any business or organization. A group cannot thrive if it lacks verbal and written communication.

Exact all of the experiments you want, but if you can’t explain to anyone how to replicate the process and what it means, it won’t do anyone any good.

An English degree develops the most essential aspect of success.

The President of Clarion Enterprises Ltd., Bruna Martinuzzi, wrote an article entitled Why English Majors are the Hot New Hires. She notes that employers have started to ask for hires with more liberal arts training. She says, “Employeers who combine a liberal arts major – especially an English major – with another major degree, such as business, science, or technology, will have a competitive advantage.”

So do not be disheartened, fellow English majors, when you receive the inevitable skeptical looks and disdain.

You are not doomed to become a teacher.