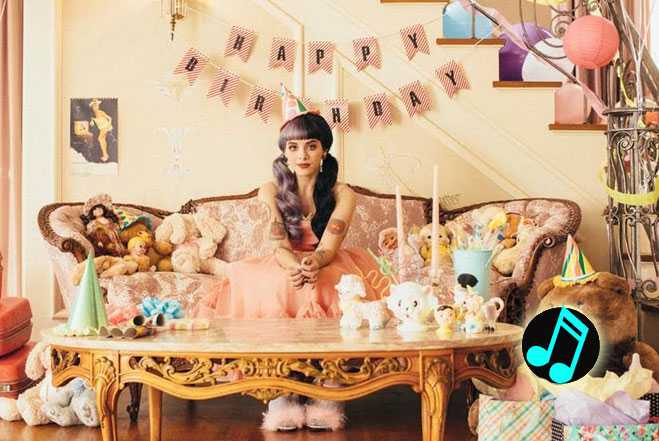 From auditioning on the famous television series, The Voice, to releasing her new album Cry Baby, Melanie Martinez is well on the road to musical success. I first discovered Melanie’s talent by stumbling upon her viral cover of “Toxic” by Britney Spears, where she is seen playing the guitar while hitting a tambourine between her feet. From there, she continued on season three of The Voice and is certainly making her voice known today in the alternative music industry.

According to Artist Direct, Melanie states this album is a reflection of her childhood. She identifies with the Cry Baby character because as a kid, she claims she took things very personally and that led to the nickname that stuck. This album, according to this interview, was about Melanie coming to terms with this imperfect side to herself; hence the ongoing theme of infancy and child-like toys/activities present in the album.

The track listing for the album includes 13 tracks for the standard edition and 3 more bonus songs for the deluxe edition (digital only), all released by Atlantic Records/Warner Music. The album is a follow up for her EP released in 2014 called Dollhouse, as well as the tracks Pity Party, Soap, and Sippy Cup released more closely to the album drop. Another huge milestone to Mel’s success would be her track, also featured on the album, called Carousel. With its haunting music undertone and Melanie’s incredible voice to match, it is no wonder it was featured in the FX hit show American Horror Story: Freak Show. Because of this, her music career took off and helped with the success of Cry Baby.

The first track on the album is called Cry Baby, fitting for the album that is called just that. It perfectly sets the mood for the rest of the songs while being a fun opener with an upbeat tempo and eerie sound (which she nails so well). The next preceding songs include, as previously mentioned, Dollhouse, which was the first music video she ever produced.

Track number three on the album called Sippy Cup slows down the tempo and keeps a calming mood to the ghostly theme of the song. This is seen in songs Mrs. Potato Head and Training Wheels as well, which seamlessly glides along with the rest of the album. Melanie Martinez also does an excellent job of boldly experimenting with different drops and beats. Her song Soap demonstrates this perfectly and if you listen to it, I guarantee you have not heard anything like this before.

Melanie’s music has a theme of hostility along with the eerie sound she is known for. If you are looking for a song to run to in the gym to get over a boy/girl, her songs Alphabet Boy, Milk and Cookies, and Pacify Her are a must. These tracks are basically a big “fuck you” to anyone who makes Miss Martinez feel small and for that Melanie, we thank you.

I wanted to save my two favorite songs on the album for last: Tag, You’re It and Mad Hatter. Admittedly, these two songs are probably the creepiest of the album but the concepts and beats are pure genius. Tag, You’re It is the tale of a little girl being abducted by a man in a van. Yeah. Creepy. But that’s what is making her music so alluring… no one else is doing what she is doing! And lastly, as an avid “Alice in Wonderland” fan, of course Mad Hatter is a personal favorite. It is a great track because Melanie admits and embraces her weird (and arguably insane) mind. If you listen to anything from this album, this would be the track I’d recommend.