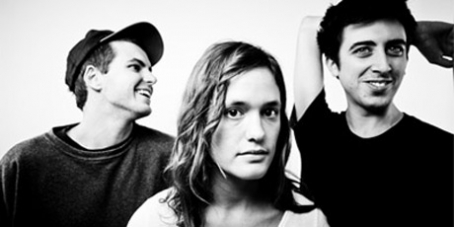 Don’t You is an alternative pop album created by Wet, a New York-based group. Wet consists of Kelly Zutrau, Joe Valle, and Marty Sulkow. Don’t You was released on January 29, 2016 as the band’s first full album.

As a debut album, Don’t You excels– Zutrau’s vocals are haunting and clear, each melody compliments the next, and each song acts as a moving part, yet can stand on its own. Don’t You demonstrates obvious thought towards blending and cohesion.

The record opens with “It’s All in Vain,” where we first get to experience the silky smooth vocals of Kelly Zutrau. After starting this track I was completely sold on everything Wet had to offer in this album. The song starts off with easy, flowing vocals, that move into a slightly more upbeat chorus. This song builds and builds until ending abruptly, but successfully with a final synth beat. “It’s All in Vain” is an excellent choice for an opening track.

“Deadwater” is the following number and carries the same easy vibes that “It’s All in Vain” brought to the album. It seems impossible that a person could become more obsessed with Zutrau’s voice after listening to the previous track, but I stand corrected. The astonishing female vocals are complemented nicely by male vocals near the height of the song, adding to the mellow tone of the track.

The third song on the album is entitled “Don’t Wanna Be Your Girl,” and begins with a slightly quicker pace than the previous tracks. Zutrau sings “I don’t wanna be your girl no more, no,” and honestly, she has me convinced. I don’t wanna be whoever’s girl no more either. The ending of the track is a little off, but the flowing nature of the majority of the song makes up for this hiccup.

“Weak” shows up in the fourth slot on the record. This track gets a little angrier, which is a nice change of tone from the mellow, calm pieces that the album begins with. By no means does “Weak” get aggressive, but it seems a little more riled up, with a little more passion than what we’ve seen thus far.

“Island” is up next and has such an interesting opening sequence. Kelly Zutrau’s voice floats like a mother-freakin’ bird. There’s more experimentation with base here– it adds some depth to previously soprano- and alto-based melodies and harmonies. This track does get a bit repetitive towards the end, which takes away from the originality of the beginning.

The sixth track, “All the Ways,” feels similar in tone to “Don’t Wanna Be Your Girl,” but with a picked-up tempo. The soothing vocals once again carry this track through moments of tension and peace. While “Island” did some tricky base stuff, “All the Ways” plays around with voice synthesizers– perhaps not the best technique to try out on an otherwise cohesive song.

“Small and Silver” is yet another experimentation track that messes with some syncopation near the center, this time successfully. The vocals and supporting instrumental chords are still on par, making this track a standard Don’t You example– complete, interwoven, and smooth.

“You’re the Best” is the eighth track on Don’t You, and one of the best. It opens with a really inventive clapping rhythm, mixed with some base variations. This song also plays with some a cappella, which is just plain cool in light of all the other things that are going on throughout the track. “You’re the Best” has some truly depressing/creepy(?) lyrics to go with all the intrigue: “All I know is/when you hold me/are you thinking Rosalie/or is she in me?/and all the rest.”

“Move Me” follows “You’re the Best” and is lackluster in comparison. Perhaps if the song had been placed elsewhere on the album, it might have shined, but with its similar vibe it feels like a repetition. This is not to mention that the lyrics themselves are very repetitive.

“Body” is the tenth track on Don’t You and can be marked as a tapering off from the succession of peppier songs we’ve just previously encountered. “Body” is almost reminiscent of the smooth, calming tracks we felt at the beginning of the record. It adds some of the experimental elements like clapping and varying base of the median tracks to Zutrau’s easy vocals in the opening section. It’s a relatively mediocre track, but successful in its own right.

“These Days” closes Don’t You and is such an incredibly mournful track. Kelly Zutrau absolutely shines once again here– she goes into an almost painfully high soprano, but it works so well because “These Days” is painfully sad. Sad, in a good way. Sad in a way that makes you want to have a really good cry and yell at whoever hurt her. It’s such a beautiful song to end the album on, and really rounds up all of the talent that Wet has shown throughout.

Wet has created a cohesive, interesting album with Don’t You. Each song holds its own territory, trying out new techniques and styles within, but also acts as a matching piece of a larger work of art.

What have we learned here? I think we’ve learned that Kelly Zutrau’s voice is magic. Also, we might have learned that we need to be looking out for the next album from Wet.