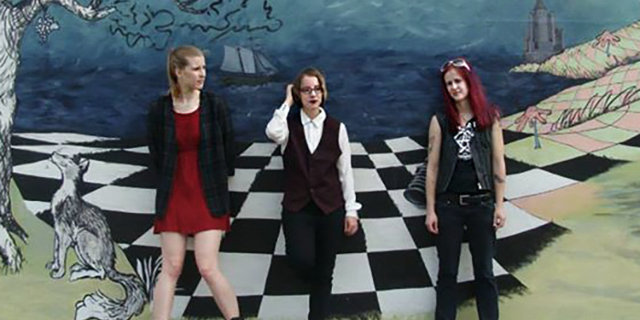 I work at John’s Grocery. I’m the John’s girl.

Somehow I found myself invited into a scene of artists and musicians largely because of this role, allowing for basic relationships with regular customers. After working at John’s, I would run into acquaintances from the store in public and at houses, bringing these relationships outside of the store.

The regulars that I see nearly everyday are purchasing groceries: inherently a domestic act. When I see them outside of the store, they’re in their or others’ houses, at house shows usually. I see everyone’s purchases, which divulges intimate details about their lives. I can comment on the purchase or choose to stay silent. However, either way, there is an intimacy already created between myself and the customers prior to interactions outside of John’s. While there is an intimate acquaintanceship, the domesticity of grocery shopping is destabilized by the fact that they’re usually buying beer. Their purchases of alcohol detract from the domestic space of their homes and supports the entertainment aspect of house shows.

Once I went to my first house show, which was also a reading, I realized how unnerving it was to walk into a home in which there was no one that I knew. Sometimes even a home full of acquaintances can be the most awkward and terrifying part of the evening. Somehow the uneasiness is worse than meeting strangers in other settings, like a bar or a concert.

The first house show on the agenda for this semester was at Governor’s Mansion and I was nervous. The line up for the night included: Maiden Mars, an all-girl band from Iowa City; Teddy Bomber, from Champaign, Illinois; and Rational Anthem, an Iowa City pop punk band that I have had the pleasure of seeing prior to this show.

Let me preface this article by clarifying that I am not analyzing bands’ sets in a traditional concert review. I will not be analyzing the music. I may include anecdotes about the bands’ performances for purely informative reasons and to supplement the portrayal of mine and other’s experiences.

As is true with Governor’s Mansion and other houses, each will have a different musical genre in attendance. However, respectively, they are all inclusive in Iowa City’s house show society.

This specific night, at Governor’s Mansion, began at 9:00 pm. The floor of the first level began vibrating, signaling that Maiden Mars’ set was starting. The unfinished basement had not yet started smelling of sweat, as it would later in the night. Proclaiming themselves as a Riot Grrl-esque band on their bandcamp is fitting. One of the girls said something along the lines of, “This guitar’s really out of tune and I don’t give a fuck,” which showcases a refreshing bad-ass attitude paired with their heavier pop-punk sound. Overall, their set was extremely well-received within the basement space.

Between sets, the majority of the audience needed relief from the humid heat of the basement. I followed the crowd to the back porch and sat observing. Casually, I began talking with Rica, a John’s regular, who offered me a healing rock to hold while I introduced myself to another regular, Jessica.

To informally interview them, I asked, “What do these shows do for you? What do they provide in your life?”

Rica, like others, attends these events to support local and travelling musicians. However, this is not the only reason for her regular attendance. Jessica and Rica both agreed that house shows provide a familial vibe due to the close-knit group of people. However, unless close friends are in attendance, a sea of strangers in this setting can feel isolating. In similar spaces, Rica feels a different vibe. There will probably be a fair number of strangers in a bar. However, there is no necessity to talk to someone because of a bar is a public space. More than likely, no one will bat an eyelash at your solitude. We arrived at the idea of inclusion, but the rest of the attendees made a dash for the basement door, signaling the end of the interview.

Teddy Bomber began their set. The basement had started to fill with lovers of punk and their friends. In this moment, the humidity and smell of physical exertion had started to accumulate, reminding everyone of the level of attendance in the close space. Not many in attendance at this show had heard of the band before. Unknown and away from home, Teddy Bomber was possibly the least acquainted with the Iowa City punk scene, but the audience welcomed them. This band is perfect for a basement show, as Sam Meyer, the host of this show at Governor’s Mansion told me. Teddy Bomber fit the pop punk and garage band genres with a hint of grunge. There were several heads bobbing and others banging as the band played a song about “not being like a bro but still really liking to get drunk.” No one had known this band well before the show but I desperately wanted to after.

I hung around in the basement while Rational Anthem set up instead of heading upstairs. I talked and joked around with friends and acquaintances

To end the evening, Rational Anthem played one of their best sets that I’ve seen. Their pop-punk sound filled the room with energy, making it incredibly easy to dance or bang your head. They also just recently left for tour, including The Fest. After that tour, they’re traveling to Europe!

Sam stood in front of me, looking back every now and then to bang his head and scream the lyrics in my face. There was a couple next to me head banging so heavily that I knew their necks would be sore in the morning. A majority of the people next to me, in front, were physically participating in the camaraderie. I understood that, as is true for other spaces, having these connections made this experience enjoyable. It filled that familial space, which sometimes empties after leaving what was home, that creates the feeling of being essential: the sentiment that if you left, your absence would be noticed.

Generally, myself and others seemed among friends. At least this was true of the front of the crowd. The number of people nearly expanded to the back of the room. After observation of both spaces, the front is usually more invested in the show and the back group of people mingle and stay stagnant. The sense of inter-connectivity in the front seems intimate and the back seems less so, but still inviting.

Those more invested in the show have a shared interest. Those further back conversed in pockets of friends or acquaintances, more excluded from others around them. The level of interest in the band, and prior experiences, shapes the experience of the house show.

Connectivity to the band and other attendees is dependent on prior inclusion and level of participation in the scene.

Without prior inclusion through past coworkers and acquaintances, I might have stood by the merchandise table while holding my flannel and occasionally writing in my blue notebook. The domestic environment of a house show makes the environment different from a bar or a music festival. The venue begs for an intimate connection to others; otherwise, it feels like encroaching on someone’s personal space and as if belonging relies on intimacy before passing through the front door.

“Home is Where the Art is: Iowa City’s House Show Scene” is a recurring column, published bimonthly, that shares the author’s and attendees’ experiences, discusses the bands’ shows, and analyzes the intimate space.