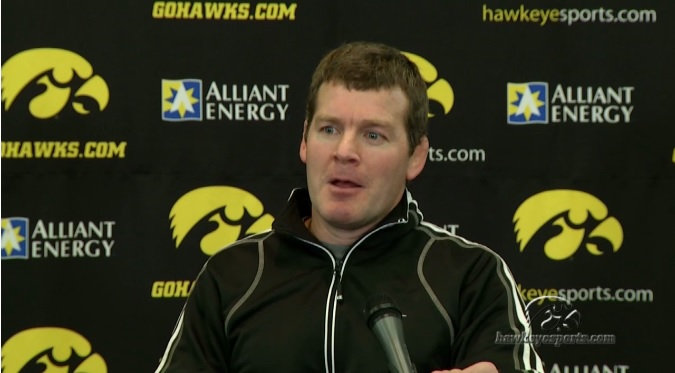 The Iowa Wrestling team is set to see its first action of the season in only a little over a week. While the date fast approaches many questions for the team still remain unanswered, but the Hawkeyes are working fast to answer those unknowns.

One of the first unknowns is where exactly the team stands in terms of winning a national title. The first USA Today/NWCA Coaches poll, which was released on Oct. 27, has the Hawks ranked #4. Head Coach Tom Brands stills feels confident in his teams’ ability to bring home a title though, “We’re in the conversation… So nothing has changed. We’re after winning a national title, and we’re after winning individual titles.”

Iowa does of course have four All-Americans returning to lead the charge for the title. They are junior Thomas Gilman at 125 pounds, junior Cory Clark at 133, sophomore Brandon Sorensen at 149, and senior Nathan Burak at 197. However, the team did lose two All-Americans to graduation last year in Mike Evans at 174 and Bobby Telford at Heavyweight.

Questions still persist about who is going to step us at certain weightclasses and be a leader. Three places without question, beyond the four All-Americans, are 174, 184, and 285.

Also looking to shine at the Hawkeyes’ soon-to-be historic record breaking first meet, Grapple on the Gridiron, is #11 junior Sammy Brooks at 184. Brooks went 29-7 in 2014-2015 losing out in the national tournament to the number 1 and 3 seeds.

The Hawks are also pretty sure at Heavyweight with redshirt freshman Sam Stoll. According to Brands, “Sam Stoll is doing a good job… The biggest thing that he has to realize is that it is about being at your best every time out, and if he can do that, he has a chance to be a real good heavyweight.” Stoll himself added, “It’s going to be a grind, you know, and I’m excited for it. That’s why you come to the big ten. You know you’re going to have the best competition… I’m excited for it.”

Senior #2 ranked Cory Clark when talking about what has been his focus said, “A lot of it was what I did in the offseason, and just being ready from the beginning of the year and not taking half of the year to get where I want to be.”

As far as leadership on this year’s team goes Clark said, “Gilman comes to mind. Gilman, he gets on guys a little bit sometimes, and he’s not afraid to say something to someone.” Brands on the other hand said senior #4 ranked Nathan Burak “is a two-time All-American. He’s a senior; he’s a 3.8 student. He’s everything you want your program to be looked upon as… when you talk about leadership, you talk about an example of what to look for in a student athlete, he’s a wrestler that embodies that and represents our program very well.

Iowa’s last ranked wrestler, according to Intermat, is sophomore #3 at 149 Brandon Sorensen. This offseason Sorensen says he has worked on consistency and “just going out there and hammering people everytime.” Sorensen added, “We all have the same high level mindset. So it makes it easy for all of us to be close.”

Unknowns still exist at 141, 157, and 165 though. At 141 Topher Carton, Logan Ryan, and Vince Turk were some of the names mentioned. “We’re going to wrestle those guys this weekend, and we’re looking for someone to emerge,” said Brands.

At 157 and 165 Brands says, “you have a couple names there that can do a good job for us… but you want someone to emerge and be the world beater.” To further complicate things is an injured Brody Grothus. “He’s good enough to go 41, 49, 57. So we have a lot of options there, and we’ll see how things shake out as we get forward and he gets closer to when he’s going to step on the mat. That time frame is late December, early January.”

Even with those three weightclasses being uncertain at the moment, the Hawks are working fast to find a man to step us and take a leadership role in those spots. With their first meet of the season only a little over a week away, necessity ought to drive that starter race to fruition.

Regardless of the impending home meet, Tom Brands said, “We’ve got to be at our best every time out, but there’s no better place to win than Iowa City.”