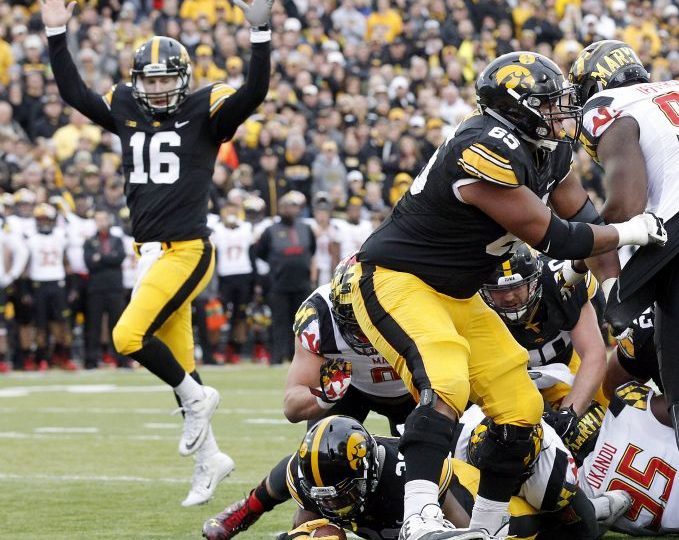 IOWA CITY, Iowa-On a wet, chilly Halloween Saturday inside Kinnick Stadium, the tenth ranked Iowa Hawkeye (8-0, 4-0) football team made sure fans were given a treat instead of a trick against the Maryland Terrapins (2-6, 0-4).

It was not pretty nor did it have style points, but Iowa found themselves victorious after a 31-15 win over the Terrapins, who were playing inside Kinnick Stadium for the first time in their history.

Iowa got the scoring started midway through the first quarter off the previously mentioned Maryland fumble when running back LeShun Daniels, who was playing in his first game since the win against North Texas, rumbled to the end zone on a one yard scamper to put Iowa on the board.

“It was good to see LeShun back out there being LeShun Daniels,” Iowa football coach Kirk Ferentz said.

The Hawkeyes were playing without leading rusher Jordan Canzeri, who is still nursing his ankle injury he suffered early in the game against Northwestern two weeks ago, but the trio of Daniels, Akrum Wadley, and Derrick Mitchell all did their part to make sure the offense was moving smoothly.

All three running backs found their way into the end zone against one of the worst rushing defenses in the Big Ten in Maryland.

Ferentz was pleased overall with the effort of his running back trio.

“We’re going to need all three of them, and we’ll be happy when Jordan gets back,” Ferentz said.

“We’ll never have too many weapons,” Ferentz added.

“The second have was pretty bumpy, but we just wanted to have the time expire, get the win, and play another week,” sophomore running back Akrum Wadley said after the game.

Two of the few bright spots for Iowa in the second half were the punting of Dillon Kidd, as well as the interception returned for a touchdown by Desmond King.

Kidd, who was named to the Ray Guy Award list for the nation’s best punter this week, had some excellent punts that resulted in numerous situations in which Maryland was pinned deep inside their own territory.

King found himself in another big time situation that gave the Hawkeyes a much needed lift when Maryland was trying to get themselves back into the game. The junior cornerback intercepted a pass from Maryland quarterback Perry Hills and ran it the other way 88 yards for a touchdown that virtually put the game out of reach.

“You dissect the formations and once you see the play, you put yourself in place,” King said about his interception.

“I was locked into my player, and when I went into the reception area it was there,” King added.

Iowa will look to continue their march for a perfect season when they travel to Bloomington, IN, next Saturday to take on the Indiana Hoosiers. Kickoff is set for 2:30 P.M. central time from Memorial Stadium.