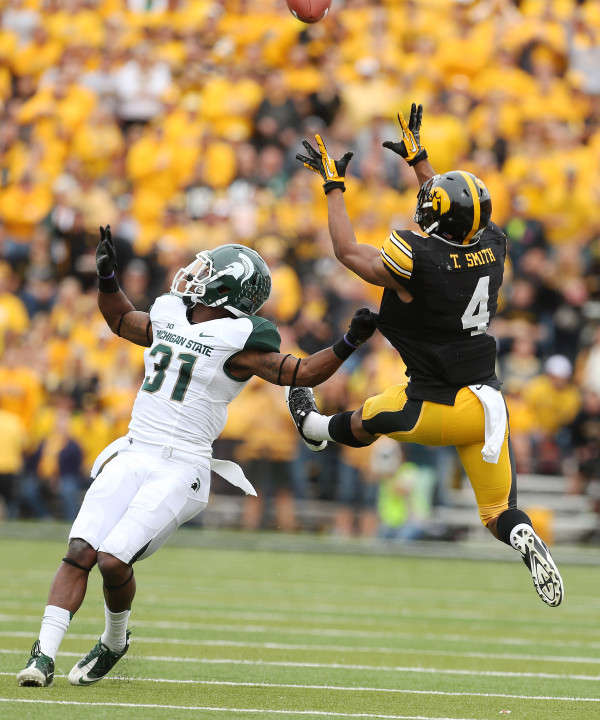 The Iowa offense has some work to do

It was a thrilling and captivating 29-28 victory for the offense in the Iowa spring game.

Okay, maybe not “thrilling.” …or “captivating.”

Both offenses struggled for the vast majority of the game, and a large portion of that falls on the quarterbacks. Iowa only has two, CJ Beathard and Tyler Wiegers, on scholarship and each looked shaky through large chunks of the contest on a cold, windy Saturday in Kinnick Stadium.

Iowa took a few shots downfield, three of which saw wide open receivers over the top. Two were overthrown to Tevaun Smith, and the other was dropped by converted defensive back Josh Jackson. Each quarterback also accounted for an interception.

“It was very windy, that’s one thing, but you can’t make excuses about that,” said the newly named starting quarterback Beathard. “That’s part of the game. You’re going to play in windy conditions. You just got to get used to it.”

The wind was no excuse for the running game’s issues.

None of the four backs under the scope, senior Jordan Canzeri, junior LeShun Daniels, or sophomores Derrick Mitchell and Akrum Wadley, were able to find much grass throughout much of the contest. Wadley saw the bulk of carries with 13 touches for about 80 yards, but no official statistics were kept.

No touchdowns were scored until sophomore running back Wadley danced into the end zone on a four-yard run with the clock paused at 5:00 in the fourth quarter. At that point, the first-team Hawkeye offense was opposed by the third-string defense, giving a little less legitimacy to the score.

Mitchell did run hard and Wadley showed some moves in their limited opportunities. I expect all four to get significant playing time, with Daniels getting the majority sharehold of touches over the season.

The offense looked completely inept at many times in the game, giving a cause for concern.

“After 15 days our defense might know our offense better than our offense does,” said Ferentz.”

Fortunately for the Iowa offense, the opening game is still several months away. They’ll need it.

Or maybe the defense is really good

For an intra-squad scrimmage, it’s difficult to gauge whether the game consisted of woeful office or plentiful defense. In this case, let’s focus on the latter.

The defensive line completely shut down the run game, the linebackers were consistently well-placed and wrapped up on their tackles, and no passes were completed over the top.

“Certainly at LB we’re a lot more veteran than we were a year ago. Right now it’s almost flip a coin for who the starters would be,” Ferentz said. “I think right now on the defensive line we’ve got three guys with Jaleel, Nate Bazata and Faith that give us a good core. The secondary is starting to clear itself out again.”

For the second consecutive public scrimmage, senior Nate Fisher intercepted backup quarterback Tyler Wiegers. In a game that is intended for the offense to win judging by the skewed scoring system, the defense took the contest right down to the wire. Hold a questionable call that guy Iowa an “explosive play,” and this may have been an outlandish spring game where the defense wins.

Special Teams are coming along

The punting decision has yet to be made, and Ferentz said that competition will likely run through the summer and up to fall. Currently, Dillon Kidd would be the projected starter, but the finalized job is still certainly up for competition between him, Kornbrath and Koehn.

Koehn, a new entrant into the punting position, connected on all three of his field goal attempts and looks more confident than over the past season. Miguel Recinos connected on his lone attempt, and Mick Ellis missed his – albeit a 50-plus yarder into the wind.

Iowa struggled mightily on special teams last year, giving up huge returns to Nebraska in a stunning comeback loss. While punting in the spring game isn’t an issue for most teams, it’s one for Iowa fans to keep an eye on.