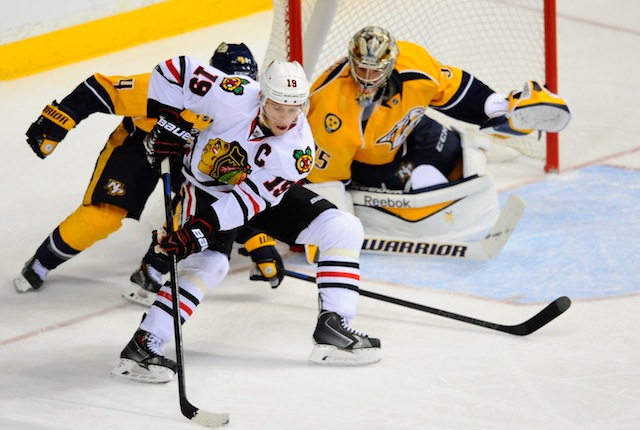 When the puck drops Wednesday night in Bridgestone Arena, the Chicago Blackhawks will find themselves in a familiar place, the playoffs. The Blackhawks have now made seven consecutive playoff appearances, adding two Stanley Cups in the process. After a two-year hiatus, the Nashville Predators are back in the playoffs and have home ice advantage in this matchup. Big name stars like Jonathan Toews, Marian Hossa, Patrick Sharp and a healthy Patrick Kane anchor the Blackhawks. Familiar faces like Pekka Rinne, Mike Fischer and Shea Weber lead the Predators. Filip Forsberg has become a key contributor as well on the Predators top line after only playing 18 NHL games over the past two seasons.

The Blackhawks come into this series losers of their last four games, causing them to fall into the three seed in the Central Division. The offense has seemed to sputter in their last seven games, scoring more than one goal in only two of those games. However, the Blackhawks received great news when Patrick Kane was cleared for full participation on Monday. Kane was electric through 61 games leading the league in points before he broke his clavicle on February 24. He could be just the spark this Blackhawk offense needs to make a deep playoff run.

Nashville comes into this series in a very similar situation as the Blackhawks, losers of their last 6 contests. Although Pekka Rinne has been sharp all season, he has allowed 16 goals in his last four starts. Rinne has to forget his recent starts and turn his attention to a Blackhawks team that can go on a goal-scoring spree when things are clicking.

THE BLACKHAWKS WIN IF: the defense can limit the Predators chances and Corey Crawford does his job between the pipes. The Blackhawks may be struggling on offense currently, but it is hard to believe that with the addition of Kane this team will not score goals. Throughout the playoff runs over the years, Corey Crawford has had a few really bad games. When going up against a fantastic goaltender like Pekka Rinne, Crawford can’t give up cheap goals and expect the offense to continually pick him up. Nashville averages 2.76 goals per game, so limiting scoring opportunities is key for the Blackhawks defense.

THE PREDATORS WIN IF: Pekka Rinne returns to early season form. Entering the season Rinne was coming off of an infection in his repaired hip that forced him to miss 51 games the past season. He started the season off like the All-Star goaltender that we have become use to seeing. Halfway through the season, Rinne was considered as one of the front-runners for the Vezina Trophy. He then missed three weeks with a sprained knee. Since returning from the knee injury he has resembled an average starting NHL goalie. Having the home ice advantage Rinne needs to keep the game close and let the team feed off the energy from the “Smashville” faithful.

X-FACTOR FOR THE BLACKHAWKS: A HEALTHY Patrick Kane. If Patrick Kane can come back and return to the form that he was in early in the season, this team will score enough goals to win this series.

X-FACTOR FOR THE PREDATORS: James Neal. Throughout this season James Neal has turned into a pain in the neck for the Blackhawks. Neal has scored five goals in four regular season games against Chicago. Neal needs to produce against this team to compete against a veteran Blackhawks team.

PREDICTION: Blackhawks win the series in six. This series will be tight, especially if Rinne can get hot, but the Blackhawks playoff experience and supreme talent will fuel them to a series win.