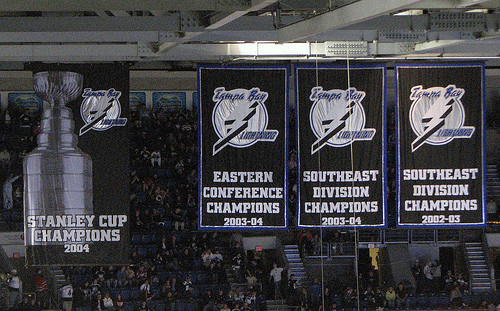 Note: Last season, I was bold enough to predict a winner for the Stanley Cup Playoffs. I went all in on the San Jose Sharks winning the first cup in franchise history. It was a solid pick too, until they got up 3-0 in the first round and then promptly lost  the next four and collapsed like only four other teams in NHL history. So without further ado: the 2015 Kiss of Death.

When the puck drops on the 2015 Stanley Cup Playoffs, the NHL will be wide open for a team to take home Lord Stanley’s Cup. The defending champion Los Angeles Kings failed to qualify for the postseason and parity in the league is at an all-time high. According to Brovada, the New York Rangers are the favorites at 11-2 odds to win it all. This year, it is much harder to figure out if the Rangers are even clear favorites, which is why the Tampa Bay Lightning are primed to win their first Cup in 11 years.

After failing to qualify for the playoffs in back-to-back season, the Bolts have made their presence known in the Eastern Conference since the start of last season. Over the last two seasons, the Lightning collected 209 points and the second seed in the Atlantic Division in both.

Last season ended in disappointment for Tampa Bay as they were swept out of the playoffs by Montreal in the first round. That will not happen again.

With a full season for Steven Stamkos, the offense has paced the league for most of the season. After scoring 240 goals last season, the Bolts totaled 262 and averaged 3.2 per game, best in the league.

What makes them so dangerous? Having a full season out of Steven Stamkos (and his 43 goals) definitely helps, but it has been the continued impact of second year players Ondrej Palat and Tyler Johnson that makes the true difference. Both were nominated for the Calder Trophy last season as they helped carry Tampa Bay during the absence of Stamos. They only got better this year.

Johnson added five more goals and 22 more points to his game. Palat saw a decrease in goals but added four more points. They formed a line with Nikita Kucherov, who scored 28 goals and was third in scoring on the team. That’s 73 goals coming from a line that wasn’t in the NHL two seasons ago…terrifying.

While Ben Bishop has seen a dip in his save percentage and goals against average, he is still the best option going into the playoffs. The Lightning found themselves without his services last season after suffering an elbow injury late in the season. He has been solid all season long winning 40 games and recording a .916 save percentage and 2.32 goals against average. Not only that, he has the best goalie mask in the league. Stability in goal will be a difference maker for the Lightning this year.

Getting through Detroit won’t be easy. Neither will potential matchups with Montreal, New York, and the winner of the Western Conference. However, with the recent struggles of starting goalie Jimmy Howard, the Red Wings are turning to Petr Mrazek to start the series. With a team locked in like the Bolts offensively, having goalie questions is not where Detroit wants to be.

Looming after the first round is a probable date with the Montreal Canadiens and Carey Price, who has essentially locked up the Vezina Trophy and very well could walk away with the Hart Trophy.  Price led the league in wins (44) save percentage (.933) and goals against average (1.96) while covering for an offense that has struggled over the course of the season. There is also no guarentee the Habs get past the red hot Ottawa Senators and Andrew “The Hamburglar” Hammond.

If Tampa Bay can get to the Eastern Conference Final, it will be a true tossup but they have the only offense in the East (besides maybe Washington) that could break the will of the Rangers defense and Henrik Lundqvist. NHL fans would only be so lucky to get to see Stamkos go up against Price and Lundqvist in the same season.

In the Stanley Cup Playoffs, a team can get by with a decent power play (though how this team is only 14th in the league with the man-advantage, I will never understand). The real key is having a solid penalty kill. Tampa Bay checks in with the 7th best in the league. With the return of Braydon Coburn and Andrej Sustr expected for the first round, the blue line is going to be even deeper. Add in the consistent offense led by Steven Stamkos, and only injury can stop this team.

My route for the Lightning: Win in five over Detroit, take out Montreal in six, Rangers in seven, and then win the Stanley Cup in a tough six game series over the Winnipeg Jets.

There it is, I am going all in on the Lightning. Tampa Bay fans, I am so sorry.