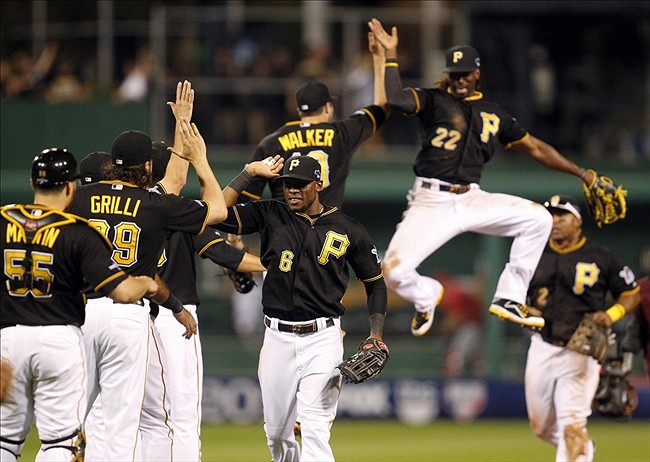 The Pittsburgh Pirates made the 2014 postseason as a wild card team, before losing to the San Francisco Giants. The Pirates finished with 88 wins in 2014. The NL Central is coming into 2015 as a much improved division. Everyone but the Brewers have a chance at winning the division. The Pirates have a few changes heading into 2015. Lets take a look.

The Pirates have an average pitching staff. Francisco Liriano is listed as the ace, but he will soon fall to the second spot. Liriano finished the 2014 season with a 3.38 ERA through 162.1 innings. He’s tough on lefties and he can get the job done against right-handed batters. He has a career SO9 rate of 9.2. He will get the job done on a day to day basis. The number one spot will be held by Gerrit Cole. The youngster has a mid 90’s fastball, and he is finally learning how to control it. He finished last season with a 3.65 ERA through 138 innings of work. At just 24, he has the time and the talent to develop into one of the top pitchers in the game. I wasn’t a huge fan of the A.J. Burnett signing. Burnett is now 38 years old and his age is finally catching up to him. The Pirates are hoping to get the same Burnett they parted ways with after 2013. He finished 2013 with a 3.30 ERA through 191 innings. Unfortunately, the Pirates will not be getting that Burnett. The real Burnett finished last season with a 4.59 ERA and 18 losses. It might be different if Russell Martin was still in Pittsburgh, but he’s not. The pitching rotation should be able to win games if the offense shows up.

We have yet another “beauty” of baseball on this team. Can you guess who it is? Andrew McCutchen? Not quite. Josh Harrison is one of the most exciting players to watch because of his hustle. Harrison has torn his way into a starting role and has proven that he belongs there. There was a play last season where he got caught in a run-down. Instead of giving up like most MLB players, Harrison made a mess out of the defense. He ran back and forth before diving into third base… safely! You have to go check out that play. It’s not hard to find.

Gregory Polanco was a highly talked about rookie last season. He was up to the major and played in the last 89 games of the 2014 season. Polanco finished with a .235 batting average and 7 home runs. He got off to a hot start, but slowed down as the season progressed. It’s only a matter of time before he breaks out. He has all the tools he needs to be successful in 2015. If healthy I expect:

The Pirates are right where they want to be heading into the 2015 season. They are solid throughout and will be ready to make a playoff run. Keep your eye on the NL Central race this season.