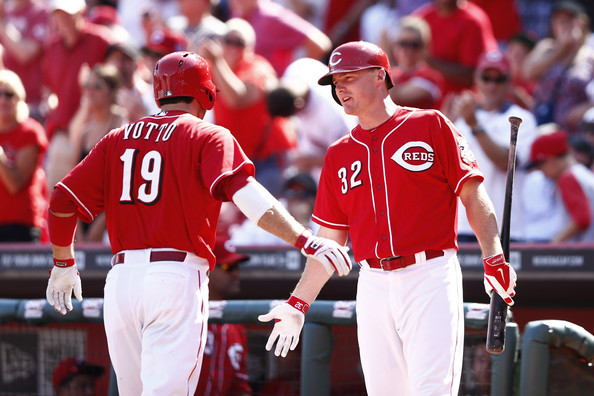 The Cincinnati Reds have all the pieces to be an elite team in the National League. Injuries held them back in 2014 and in such a competitive division, they need to be healthy in order to compete. They can win the NL Central in 2015 if all goes right. Let’s take a look at the changes heading into 2015.

The starting rotation is strong enough to keep them in games. It is led by Johnny Cueto, who might be the most underrated pitcher in all of baseball. He has excellent control and has a delivery that hides the ball unusually well. He threw in a league leading 243.1 innings and finished with a 2.25 ERA in 2014. Cueto was a true workhorse and might have won the MVP Award if Clayton Kershaw hadn’t had the historic year. Homer Bailey is the second man in the rotation and is not as bad as, analyst, Martin Silva thinks he is. Bailey has kept him ERA in the 3’s for the past three seasons. He finished last season with a 3.71 ERA through 145.2 innings. He’s not a great pitcher, but he is certainly capable of number two work. The rest of the rotation will be solid. Nothing special, nothing bad.

Joey Votto will be looking to stay healthy in 2015. He missed the majority of last season due to injury. Back in 2013, Votto finished with a .305 batting average and 24 home runs. Votto got on base more than anyone in baseball in 2013. He drew 135 walks and held a, league leading, .435 OBP. Votto is a guy who never tries to do too much. He is plenty capable of driving in runs, but can also sit back and draw a walk. Votto will be crucial for this team in 2015. Devin Mesoraco was a pleasant surprise in 2014. He finished with 25 home runs in just 384 at bats. He held a .273 batting average and a .534 slugging percentage. He also drove in 80 runs. Mesoraco’s offensive contributions were incredible in 2014 and he will be looking to replicate them in 2015. Jay Bruce will be looking to bounce back in from his below average 2014 season. Bruce has a career slugging percentage of .467, yet it was just .373 in 2014. He struggled to hit for contact, finishing with a .217 batting average. It appeared to be a dud year for Bruce, but he should rebound in 2015. The Reds will need his leadership and power heading into the new season.

We have to stop and talk about another “beauty” of the game. Brandon Philips is one of the most exciting players to watch in all of baseball. He has incredible defensive range and is not afraid to get dirty. He makes plays that even professionals can’t make. He turned a double play from his knees last season. If you don’t believe me, look it up. Everyone should watch the defensive highlight reel of Philips. Philips is a great leader and should be a role model to the young kids playing baseball. Make sure to watch at least one Reds’ game in 2015 just to watch Philips. It’s not everyday that we see a player like him.

I can’t go without mentioning Aroldis Chapman. Chapman has been one of the top closing pitchers in the game. He has a career ERA of 2.32 and and a 15.3 SO9 rate. His fastball has reached 106 MPH in a MLB game. You can hear the ball hit the glove from anywhere in the stadium when Chapman is throwing. Expect him to continue dominating batters.

DeSclafani will be a starting pitcher the entire season for the first time in his career. At just 24, he will have the opportunity to be the number four starter in the Cincinnati rotation. He struggled in 2014, finishing with a 6.27 ERA in his first season in the Majors. He’s had an outstanding spring and will be looking to carry that success over to the regular season. He’s thrown in 19.2 innings this spring and posted a 1.83 ERA. If he is able to locate his pitches, he will be successful in 2015. If healthy I expect:

Cozart will have to find his power in 2015 if he wants to contribute. He finished the 2012 season with 15 home runs and a .399 slugging percentage. He struggled finding his power last season, finishing with a .300 slugging percentage and just 4 home runs. The Reds have multiple players who can hit 20+ home runs but Cozart will be one of the most important hitters. If he can hit double digit home runs, the sky is the limit for this team in 2015.

The Reds have all the talent they need. They have a true ace, a top closer, power bats, and speed with Billy Hamilton. They need to stay healthy to be successful in 2015. The NL Central will be nothing less of superb in 2015.