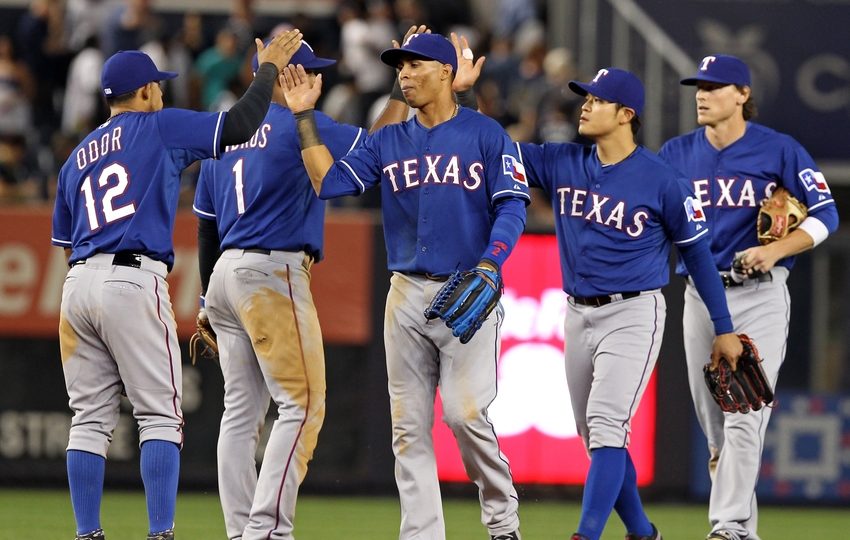 Oh Texas… It’s hard talking about the Rangers because they have so much potential but just can’t figure it out. The Rangers were hit by the injury bug in 2014 and never recovered. They finished with the third worst record in baseball losing 95 games. The Rangers will try to rebound in 2015 and have made some changes to help their cause. Let’s take a look at the changes.

None of these moves will put the Rangers in a spot to compete. They just need to stay healthy! Unfortunately it’s been a rough start for Texas. Ace, Yu Darvish, has already had season ending surgery on his elbow. Darvish was, without a question, the key piece to the puzzle. The Rangers can only hope that Darvish is the one and only injury of the season.

The starting rotation was awful in 2014 and will struggle again without Darvish. They finished with a 4.75 ERA and opposing hitters had a .281 batting average against the starters. The bullpen was unable to provide much relief as they posted a 4.02 ERA and blew 14 games.

Ross Detwiler and Yovani Gallardo will offer some assistance to the pitching rotation in 2015. Detwiler hasn’t pitched a full season in the starting rotation since 2012 when he finished with a 3.0 ERA through 168.1 innings. He should enjoy being back in a starting role and hopefully will be able to repeat his 2012 performance. Gallardo threw in 192.1 innings finishing with a 3.51 ERA. I think he will struggle in Texas due to the fact he will be facing a designated hitter for the first time in his career and will have to pitch half of his games in Arlington. He will still be better than any other option the Rangers currently have.

If the Rangers are going to win this season they will have to out hit their opponents. I think they have the talent to do so with Adrian Beltre, Prince Fielder, Shin-Soo Choo, Elvis Andrus, and Leonys Martin. Adrian Beltre has been the most consistent third baseman in the game over the past few seasons. He posted a .324 batting average and a .492 slugging percentage in 2014. He has hit 85 home runs over the past three seasons and has driven in 271 runs. He will continue to be the top third baseman in the league. Shin-Soo Choo should be able to find his way on base more in 2015 with more protection in the lineup. He drew 112 walks and posted a .423 on-base percentage in 2013.

Martin is one of the best defensive center-fielders in the game. He truly gives the Rangers an edge in the field. He has improved offensively each year and I think that he will find himself as a top ten center-fielder in 2015. He had a .274 batting average and drove in 40 runs in 2014. The return of Prince Fielder to the lineup will make everyone better including Martin. If healthy I expect:

Fielder missed the majority of 2014 with a back injury. He hit 50 home runs in 2007 and has been one of the most relied upon players in the game. He’s played in 162 games four times in his career and should be healthy in 2015. Texas fans will be anxious to see what Fielder can do at Arlington. It’s a friendly ballpark for left-handed batters and he should have multiple field days. He’s driven in over 100 runs six times in his career and will be looking to add a seventh. The Rangers will have to have Fielder at his finest to compete in 2015.

The Rangers will go as far as their offense will carry them in 2015. The pitching should be better and the offense will produce more runs if they can stay healthy. They have a tough road ahead in an extremely competitive division.

I can’t go without mentioning the relationship between Adrian Beltre and Elvis Andrus. These two should be the first thing any kid watches when learning about baseball. Andrus and Beltre are not only great players but great teammates. They always find ways to mess with the other in a playful way. They show the beauty of baseball. It is a game and games are supposed to be fun. They remind us that this a game that grown men get to play 162 days out of the year. If you only take one thing from this article, take note of the relationship between Beltre and Andrus and stop and watch them at some point this season. It truly is something to admire.