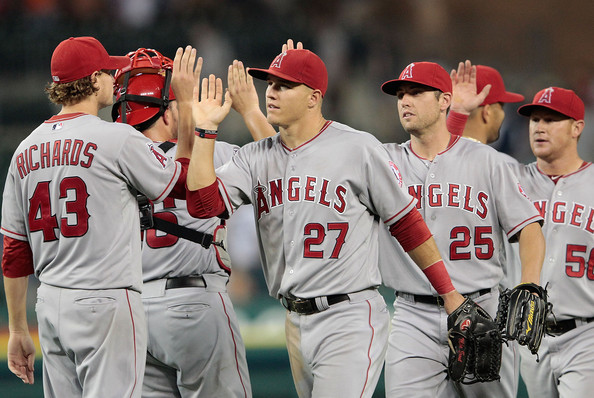 The Los Angeles Angels had the best record (98-64) in baseball heading into the 2014 postseason. Their season came to a screeching halt when they ran into the red hot Royals. The Angels were swept in the first round. They have made a few moves to improve their team in 2015. Let’s take a look at the key changes.

Personally, I think the Angels are going to struggle a lot more than people expect in 2015. Every team in the AL West got better this offseason except for the Angels. They already had a shaky bullpen in 2014 and they got rid of Kevin Jepsen. The reliever finally figured it out last season when he finished with a 2.63 ERA and a 10.4 SO9 rate. They also lost reliever Jason Grilli. He wasn’t as effective as Jepsen but still provided depth and veteran leadership in the bullpen. The starting rotation should be decent again but will need Garrett Richards to return to form coming back from his injury. Richards was phenomenal in 2014 before he suffered a freak knee injury that ended his season. He left with a 2.61 ERA through 168.2 innings of work. If healthy, he is undoubtedly the ace of the squad. Andrew Heaney was acquired by the Angels earlier this offseason but still doesn’t look ready to be a dominant force in the show.

The biggest concern is Josh Rutledge who has the unfortunate duty of taking over for Howie Kendrick. Kendrick has been the definition of consistency in Anaheim since 2006. He never finished a season with a batting average less than .279 and was a fan favorite. Kendrick now finds himself in Los Angeles wearing Dodger blue. Those are some big shoes to fill for Rutledge. Rutledge finished 2014 with a .269 batting average. That number might not frighten you until you realize that he was a .215 hitter outside of Coors Field. I don’t see the Rockies anywhere on the Angels’ schedule this season.

Mike Trout will have to continue playing at the superstar level if the Angels are going to compete. He has some areas that he needs to improve on in 2015. Trout struck out 184 times in 602 at bats. He also only managed to steal 16 bases, which was a career low. Strikeouts do nothing for the team and he needs to be more selective.

Cowgill is my breakout candidate for one simple reason; he needs to be. I’m assuming that the Angels are going to lose Josh Hamilton for a while to a suspension. Cowgill will be given the opportunity to be a starter and will be looking to take advantage of it. He hit .250 with 5 home runs last season. The Angels will be looking for Cowgill to produce in the absence of Josh Hamilton. If healthy I expect:

C.J. Wilson finished with a 4.51 ERA over 175.2 innings of work. That is his lowest amount of innings since and highest ERA since 2009. Angel fans can only hope that it was a fluke year. The offense will be there but the pitching staff needs to step up in a big way. Wilson has had success in past when he finished with a 3.38 ERA through 212.1 innings in 2013. He will need to return to form if the Angels want to have a chance to compete.