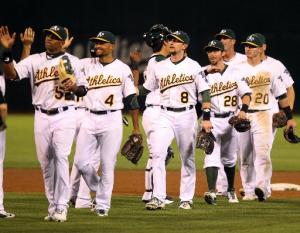 Happy St. Patrick’s day! In spirit of the holiday, we will be focusing on the only green team in baseball, the Oakland A’s. It was a disappointing ending for the A’s last season when they were eliminated from the playoffs after the wild card game against the Kansas City Royals. Fans assumed that Billy Beane was entering another rebuilding phase but soon realized that he’s all in again. Let’s take a look at the changes heading into 2015:

I refuse to doubt Billy Beane and his master plan. He always seems to be one step ahead of the game. I think a lot of people are down on Oakland this year. I still think this team has a shot at going far. They have a solid pitching staff and added some big names to the offense. I actually loved the move for Brett Lawrie. He’s younger and cheaper than Josh Donaldson and that’s just what Billy Beane was looking for. Lawrie has some pop in his bat and finished with 12 home runs in a shortened 2014 season. He could be a difference maker in the future. I was a big fan of the Ben Zobrist signing as well. He is a guy that you can count on for solid defense and double digit home runs. You can throw Zobrist just about anywhere on the field. He finished with a .272 batting average and 10 home runs in 2014. The addition of Billy Butler takes care of the DH spot. Butler has been one of the more consistent designated hitters in the league the past few seasons. He has 428 RBI’s and 87 home runs over the past 5 seasons.

The pitching rotation will be led by Sonny Gray. He has been fantastic in his first two seasons, winning 19 games. He was a work horse last season, throwing in 219 innings and finishing with a 3.08 ERA. Gray is was one of the most consistent pitchers in the game last season and should continue to produce in 2015. Scott Kazmir will be the second man in the rotation in 2015. He through in 190.1 innings last season and finished with a 3.55 ERA. Newly acquired Jesse Hahn will hold the third spot in the rotation and will be looking to duplicate his 3.07 ERA from 2014. Jesse Chavez was solid in 2014, finishing with a 3.45 ERA. Theres no reason to believe that he will struggle in the upcoming season. Drew Pomeranz will be the final starter in the rotation. He only threw in 69 innings but finished with a 2.35 ERA.

The offense might struggle a bit but the pitching will keep them in games. The bullpen will be able to close out games as well as any other team. Closer, Sean Doolittle, finished the 2014 season with a 2.73 ERA. The bullpen will be helped by Tyler Clippard. The set-up man has been dominant throughout his entire career. He holds a 2.88 ERA through his first eight seasons. He will enjoy pitching in Oakland and should continue to be dominant pitcher that he is.

Pomeranz has the stuff to be a number two pitcher in this league. He’s never pitched a full season as a starter. He started ten games for Oakland last season and finished with a 2.35 ERA. He’ll finally have his chance to be a full time starter in 2015. I think he will find his rhythm early in the season and should be one of the better south-paws in the league. If healthy I expect:

The A’s should be solid in 2015 and will be looking to make the playoffs again. The AL West will be a competitive division this season. It’s safe to assume that the A’s will have new faces by August. Happy St. Patrick’s Day!