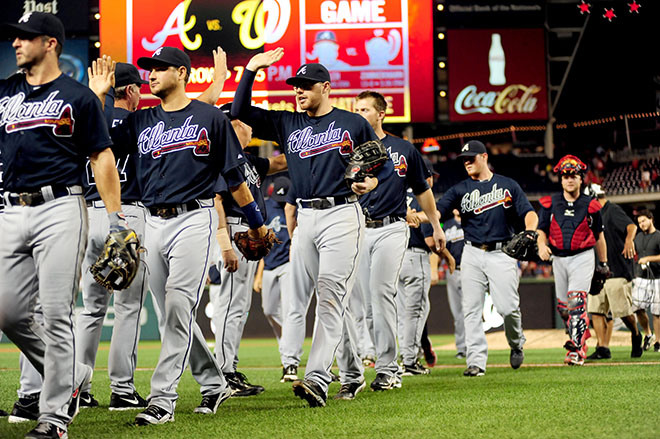 The Atlanta Braves have been competitive in the NL East for the past few seasons. They have lived and died by the long ball. The Braves gave away quite a few players this offseason. They will have a new stadium ready within three years, and are looking to be competitive then. Let’s take a look at the offseason moves:

I don’t think the loss of Justin Upton  hurts this team all that much. He was a power bat but struck out too much for my liking. Upton was also a below average defender. Evan Gattis will be missed by the Atlanta fans. He brought excitement to the game with his power. You never quite knew when the ball was going over the fence.. you just knew it would happen eventually. The loss of Jason Heyward does bother me a bit. I thought they should lock up Heyward with a long term deal. It’s rare to find a left-handed bat with so much power and incredible defensive skills. Heyward is only 24 and should develop into one of the best players in the game.

The addition of Shelby Miller will help this team in the long run. Miller dipped down a bit in 2014 finishing with a 3.74 ERA through 183 innings. Miller is just twenty-four years old and holds a 3.33 career ERA. I like the signing of Nick Markakis to fill the slot in right field. He is a consistent player who will provide a solid defensive glove and should finish with a batting average around .280. He is always in the double digits for home runs and should fit well with this club.

The Braves had one of the top starting rotations in the game last season. They ranked fifth in ERA finishing with a 3.42 ERA. The pitching should be solid again in 2015.

I have to talk about my favorite player on the Braves, Andrelton Simmons. Simmons is an absolute master with his glove. If you have not seen his defensive abilities, you better go pull up a highlight reel. The guy is not human. He can do things that video gamers would think were fake. His hitting doesn’t need to come around because he is more than valuable with just his two bare hand. And yeah, he likes to make barehanded plays. Atlanta fans should be paying full price of admission just to watch him field a ground ball. Make sure to watch Simmons in 2015.

This team doesn’t really have any breakout candidates. I would talk about starting pitcher Alex Wood, but he has already broken out. Wood had an outstanding season in 2014, finishing with a 2.78 ERA through 171.2 innings. He should continue to get better with time. Wood is just twenty-four years old.

Freeman is the core of this new team and will look to lead the way in 2015. He is a left-handed bat with a solid amount of power. Freeman finished 2014 with a .288 batting average and 18 home runs. If Freddie can get and stay hot, this team will follow his lead.

The Braves are going to struggle in 2015 but still have the potential to win 75-80 games. They are in a tough division and will have to bring their A game to keep up with Washington. There are not high expectations for the Braves heading into 2015.