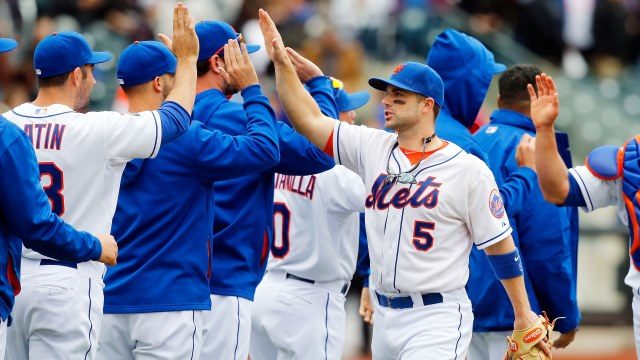 The NL East will no doubt be dominated by the Washington Nationals in 2015. There are still wild card spots up for grabs and I think the Mets have a solid shot at making the wild card game. They won 79 games in 2014 and have the pitching to win 85 or more. The Mets had a fairly quite offseason but will be ready to compete in 2015. Lets take a look at the changes:

The quite offseason shows that the Mets are satisfied with where they are. They really didn’t lose anybody and the added some depth in the outfield. Michael Cuddyer was clearly the biggest signing of the offseason for the Mets. Cuddyer missed a large portion of 2014 due to injury. He was a big contributor when he was on the field. He finished 2014 with a .332 batting average and 10 home runs through just 190 at bats. He hit .331 with 20 homers back in 2013. There will definitely be a drop in his batting average and power due to the fact that Cuddyer won’t be playing at Coors Field. He will still provide the offense with a boost.

The Mets have one of the best pitching rotations in the League right now. The rotation finished in the top ten with a collective ERA of 3.49. New York fans have to be excited about the starting rotation. They were great last season without their ace, Matt Harvey. Harvey missed 2014 due to an arm injury but he will be back in action this season. He has a 2.39 career ERA and a 9.9 SO9 rate. Harvey will be looking to lead the team in 2015. Zack Wheeler was nothing short of impressive in his first full season. He posted a 3.54 ERA through 185.1 innings of work. Wheeler is currently listed as the number two pitcher for the Mets but is not far ahead of Jacob deGrom. The tweny-four year old was dominant in 2014 and was the winner of the Rookie of the Year Award. He finished with a 2.69 ERA and a 9.2 SO9 rate. The Mets will have at least three pitchers who have the potential to finish with a 9 SO9 rate or higher. Opposing teams will not enjoy trying to hit these dominant pitchers. Jon Niese will be the fourth pitcher in the rotation and is one of the better end of the rotation guys in the league. Niese finished 2014 with a 3.40 ERA through 187.2 innings. Noah Syndergaard might find himself in New York this season. Syndergaard is the number two pitching prospect in all of baseball right now and has a hard fastball. He touches upper 90’s consistently and will be another guy with a high SO9 rate. There’s no question that the pitching rotation will carry this team and give the team opportunities to win games.

The offense will have to play fundamental baseball and manufacture runs. They are not a high powered offense but they have the ability to score. It will be crucial for David Wright to improve from last season. Wright is a .298 career hitter and is generally good for 20 home runs each season. He only hit .269 and had 8 home runs in 2014. The team will be looking for him to lead the way.

Travis will be the starting catcher for the Mets in 2015. He will be entering his second full season and will look to improve his bat. He hit .242 last season and hit 13 home runs. He won’t be anything spectacular, but he will have the opportunity to impact the club in a huge way. He will man the pitching staff and should hit for some power. If healthy I expect:

You have to appreciate the work of Lucas Duda. He is undervalued by a lot of people but he should become a more well known name in the near future. He actually had a vote for the MVP award in 2014. That says a lot. Duda is a power threat and will never hit for a high average. He finished with a .253 batting average and hit 30 home runs with 92 RBI’s in 2014. When he is on, this team has the ability to score more than expected. This team will have a great year if Duda can repeat.

The Mets will surprise people in 2015 with their strong pitching rotation. I truly think they will contend for a wild card spot and should be feared by other teams. If you enjoy watching masterful pitching, you will love watching the Mets.