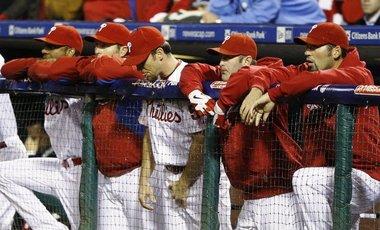 Today’s article will be different compared to the first ten. I can promise you this will be the shortest article of the month…by far. I don’t even want to talk about the Phillies because they are just flat out embarrassing . They are still a part of the MLB so I guess I’ll talk about them for a little bit.

The Phillies are an awful team. They won’t win many games in 2015 and they won’t bring any excitement to the game. They haven’t improved in the offseason…they got worse. Lets take a look at the changes heading in 2015:

The Phillies are a prime example of how NOT adapting destroys you. They decided to hang onto their core guys and try to make it work. They failed. Jimmy Rollins is now a Dodgers and Ryan Howard is one of the worst first basemen in the league. Chase Utley  still managed to hit .270 last season, but his age will soon catch up with him. I don’t understand why Cole Hamels is still on this team. He is still effective enough to get quality names in return in a trade. The Phillies need to trade Hamels. He is doing NOTHING for the team right now other than taking money.

It looks like Cliff Lee will be shut down for the rest season and possibly his career due to injury. This would be yet another blow to this already dying team. The offense struggled in 2014 and finished with a .242 batting average. The loss of Jimmy Rollins will hurt more than most people expect. Rollins finished 2014 with 17 home runs and hit 22 doubles.

I will not be giving a breakout player or game changer today. This team cannot be saved this year. You could give them Mike Trout and they would still finish below .500. I truly feel sorry for any Philadelphia fan out there. We all know that the NBA has not been friendly this season, and now the Eagles are being disassembled. The Phillies will bring no hope for the city this season and for that, I’m sorry.