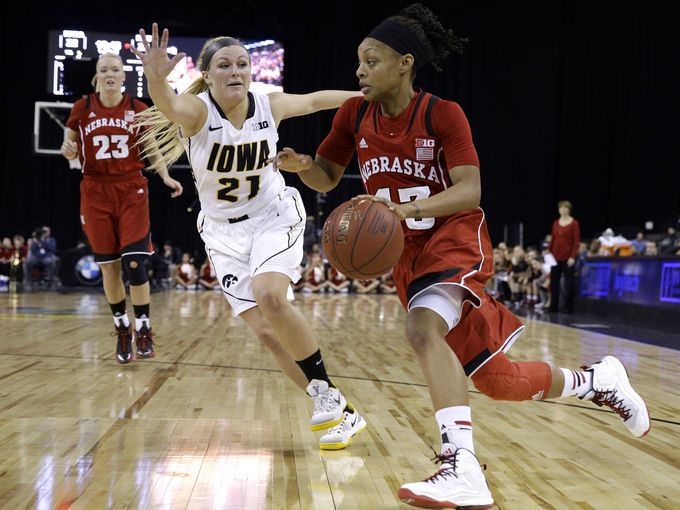 HOFFMAN ESTATES, Ill.– The second-seeded Iowa Hawkeyes completed a three-game season sweep of Nebraska with a 74-65 win over the seventh-seeded Cornhuskers Friday night in the quarterfinals of the Big Ten Women’s basketball tournament.

The Hawkeyes (25-6) got off to a hot start hitting their first four shots from the field to take a 9-2 lead just two minutes into the game. Iowa would lead by as many as eight points in the first half behind 11 points from senior center Bethany Doolittle, who was taken out after her second foul with 9:24 remaining in the half.

The real story of the game was the play of the Hawkeye bench, led by Kali Peschel who scored 13 points on 3-of-5 from three-point range and gave the Hawkeyes the spark they needed, especially with Doolittle in foul trouble throughout most of the game.

“Coming off the bench, I know my role is to get in there, play defense and get rebounds and hit that open shot.” said Peschel. “I credit my teammates so much, they do a great job of finding me in those situations and it’s always nice when the ball goes in the hoop.”

The Hawkeyes also got strong play off the bench from Claire Till, who scored just two points, but grabbed eight rebounds and made countless other hustle plays in her 15 minutes as the Hawkeyes took a 36-33 lead into halftime.

“Kali and Claire came in today and just played so well when Beth had foul trouble.” said Iowa point guard Samantha Logic who scored 15 points and had six assists on 6-of-13 from the field. “We have so much confidence in them every single time they come out on the floor. They played huge minutes for us.”

The Hawkeyes opened the second half on a 17-5 run to take their largest lead of the game at 53-38 with just under 14 minutes left to play. Nebraska would get no closer than five with under a minute to play as the Hawkeyes finished it off from the free throw line, going 16-of-20 for the game as a team.

Four Hawkeyes total scored in double figures, including Ally Disterhoft who continued her stellar play against the Huskers this season, finishing just shy of a double-double with 16 points and nine rebounds.

The Cornhuskers (21-11) were led in scoring by senior Tear’a Laudermill who had 16 points to go along with five assists, and Emily Cady who scored 15 points and grabbed 8 rebounds.

Iowa extended its winning streak over Nebraska to three games, and snaps a three-game Big Ten tournament losing skid to the Huskers, who had defeated Iowa in all eight previous meetings between the two teams entering this season.

“This was a good way for us to start tournament play.” said Iowa head coach Lisa Bluder. “We talked a lot about rebounding and defense and I think we did a good job in both of those categories today.”

With the victory, the Hawkeyes now move onto the tournament semi-finals tomorrow night where they will face the winner of sixth-seeded Minnesota and third-seeded Ohio State.