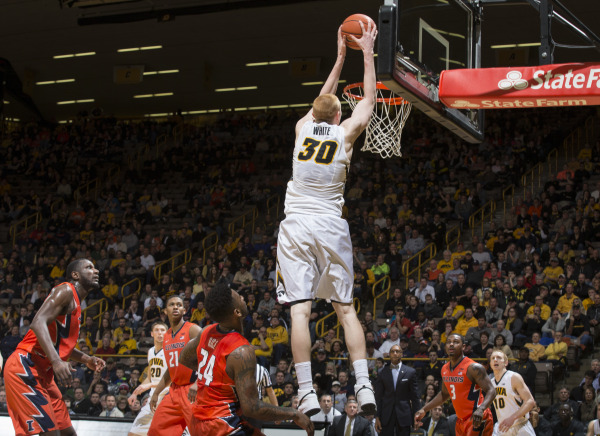 IOWA CITY, Iowa– The Illinois Fighting Illini (17-11, 7-8) traveled to snowy Iowa City to take on the Iowa Hawkeyes (18-10, 9-6) in front of a paid attendance crowd of 14,831 inside Carver-Hawkeye Arena. The Fighting Illini had won four of its previous five games in Carver-Hawkeye, but couldn’t make it five of six, as the Hawkeyes defeated the Illini 68-60.

The snowy conditions in the state of Iowa may have created some tough driving conditions for the Hawkeye fans in attendance, but the drive was well worth it as they saw senior Iowa forward Aaron White put up a career-high 29 points. “He played like a senior is supposed to play this time of year,” Illinois Head Coach John Groce said. “When they needed him, he came up with big buckets, rebounds and played with inspiring effort.”

This is White’s second to last home game as a Hawkeye and he wanted make an impact. He did just that by scoring 20 second-half points, and scoring 14 straight for his Hawkeyes. “It was a big part of the game, I wanted to put my footprint on this game,” White said. “ I wanted to make sure we won this. I wasn’t going to sit back and let them (Illinois) dictate it.”

White was held to only nine first-half points on 3-of-7 shooting. However, Illinois couldn’t keep the contain up in the second-half. “I think they executed him really well,” Groce said. “He also went 10-12 on free throws, and you usually get those by being aggressive and he has been that way throughout his career.”

Groce is right, we did see an aggressive Aaron White tonight. In weeks past, when White is open for a three at the top of the key, he pump fakes and drives to the hoop. Tonight, he squared up and went three of four from behind the three-point line. “It’s way easier to play when my shots are falling,” White said. “I wasn’t lying when I said I could shoot.”

White also played a team high 36 minutes tonight, and although scoring 29 points is impressive to his Head Coach, Fran McCaffery said his energy level was just as good. “Normally midway though the second-half I’m tyring to figure out how to get him out and rest him,” McCaffery said. “(Tonight) he didn’t want to come out.”

As for why he didn’t want to come out? Tonight was more than just a game. “Iowa doesn’t like Illinois and Illinois doesn’t like Iowa,” White said. “It was a very intense game out there. Both teams wanted it so bad.”

Iowa carries their three game win streak to Penn State on Saturday as they take on the Nittany Lions.