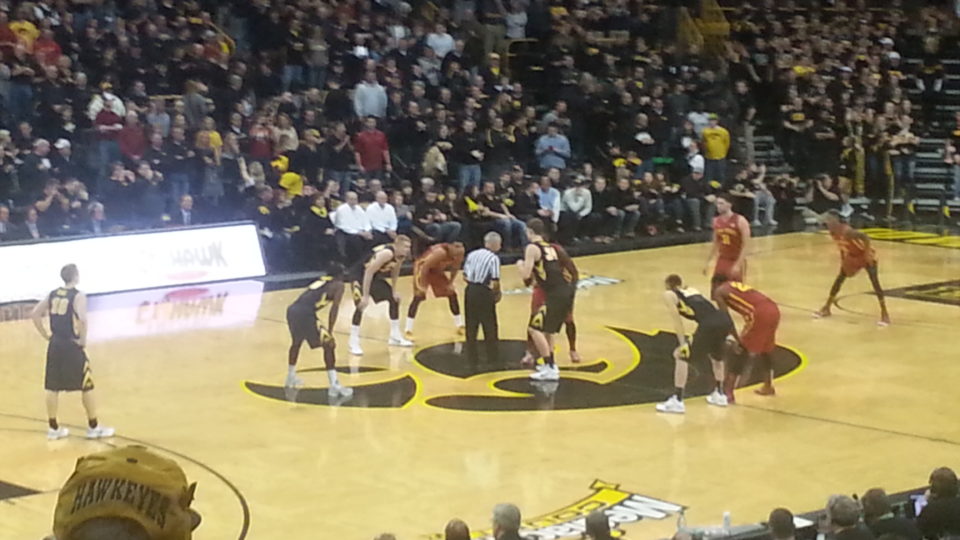 Cyclone junior Naz Long led all scorers for the Cyclones with 21 points including five 3-point shots.

“This is a good Iowa State team who has a ton of playmakers,” McCaffery said. “[Abdel] Nader was one of those guys who really impacted the game for them tonight.”

Impact is exactly what Nader did. The redshirt junior scored 19 points coming off the bench for the Cyclones, who shot 53% as a team.

The first half was full of high energy plays. Hawkeye senior Gabe Olaseni sent Hawkeye fans into a frenzy early in the game as he recorded a demolishing block on Nader. Olaseni fished with 5 points and 2 blocks on the night.

The Hawkeyes were able to hold Georges Niang to 2 first-half points, but Iowa States sharp shooters made up for his lack of play shooting 44% in the first half. Cyclone guard Matt Thomas drilled a buzzer-beating three to send his team into halftime with a 38-33 lead.

However, the game got away from the Hawkeyes early in the second half.

A major area of concern this season for the Hawkeyes has been their long scoreless stretches. The Cyclones took advantage of a five-plus minute scoring drought as they went on a 23-4 run that included five-straight Iowa turnovers.

Niang was able to find his shot and scored 14 second-half points while dishing out 7 assists.

Leading the Hawkeyes was senior Aaron White who recorded 18 points and went 5-5 from the free throw line. White has now scored double digits in every game this year for the Hawkeyes. White’s performance was not enough for the dominant Cyclone team.

A bright spot for the Hawkeyes was shooting touch of Peter Jok who added 14 points, going 5-10 with two 3-point shots.

The Hawkeyes will need to find answers to their prolonged scoring droughts. Iowa State was able to take full advantage of costly Hawkeye turnovers in the second half.

“You have a great win, or you have a tough loss,” McCaffery said. “You go back to work…you have to get them believing again because they clearly had doubt tonight.”

The Iowa Hawkeyes will have the week off for finals, but will return to action on Saturday, December, 20 against the #23 UNI Panthers in Des Moines. Tip-off is scheduled for 6:30.