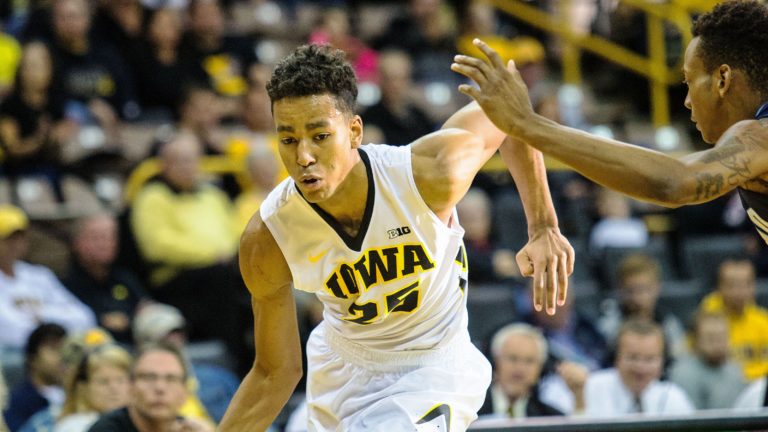 The (8-2) Iowa Hawkeyes and the Alcorn State Braves (1-6) tipped off tonight inside Carver-Hawkeye Arena on Aaron White bobble head night. Entering tonight’s game, the Hawkeyes, as a 30-point favorite, looked to get their 400th win inside Carver-Hawkeye, and they did just that, defeating the Braves 67-44. Aaron White did what he normally does, leading the Hawkeyes in scoring with 15 points, getting nine of those points from the free throw line. “He’s got an incredible ability to get there in a variety of different ways,” head coach Fran McCaffery said. “We can post him up, we can get him in transition. We can get it to him out of the motion game. He’s just has a knack for getting open and creating angles and getting to the free throw line.”

The Hawkeyes had four guys in double figures tonight, which includes junior Jarrod Uthoff. He scored 13 tonight, on 6-11 from the field and 1-3 from the three-point line. “He (Uthoff) was aggressive, and that’s what I want him to be. He had some pull-up jumpers early, and then he hit the big three and then added a terrific move at the end of the half,” McCaffery said.

At this point, we all know the situation Gabe Olaseni is in, and he continues to play inspired basketball. The senior forward had another double-double tonight with 12 points, and 10 rebounds. Early on Olaseni wasn’t hitting his shots offensively but he found ways to stay involved, and impact the game. “The thing you’ve got to love about him (Gabe), again the shot’s weren’t falling, so he gets six offensive rebounds. He recognizes we need him to go back and get it for us,” McCaffery said.

Perhaps the most surprising star for the Hawkeyes this season showed up again tonight. I’m talking about the 6-8 freshmen out of Frankfurt, Germany, Dom Uhl. He had a career high 11 point and added 6 rebounds to the stat sheet. “I thought he was terrific. I think it starts with him, with his energy level, and he was really active,” McCaffery said. “He was attacking the basket off the dribble, making plays for other people.”

There were a lot of good things that happened tonight for the Hawks. Normally things do when a team wins by 23. But if there was something that didn’t go so well for the Hawkeyes, it was the three-point shooting. Iowa shot a dreadful 16-percent from beyond the arc that came on 3-19 shooting. All McCaffery can tell his guys is, keep shooting. “They were wide open” he said. “I only get upset if they start hunting them and start shooting uncontested trees or ill-advised.”

Iowa moves on to the 13th ranked Iowa State Cyclones on Friday inside Carver-Hawkeye Arena, trying to get revenge from last year’s loss, a loss that could have easily turned into a win. “I think the (Iowa State) loss last year stuck with us longer because we had them,” White said. “We’re happy for the opportunity on Friday. We have them at home, it should be fun.”