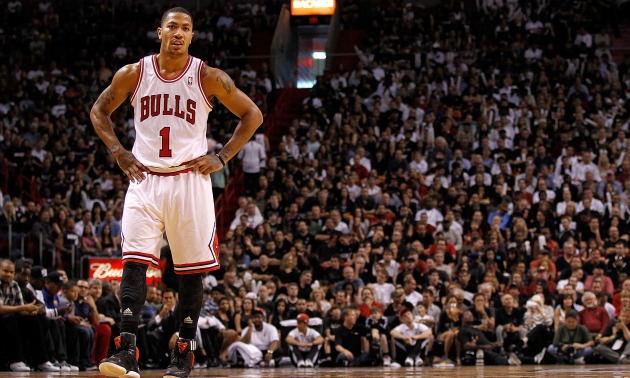 Whether it’s the fact that he’s played a total of 54 games out of a possible 242 games since the start of the 2011-12 season, him making questionable comments about sitting out so he won’t be walking with a limp at his son’s graduation or the fact that he doesn’t recruit top players to join the Bulls.  But the fact still remains, if the Chicago Bulls want any chance at a championship, they need Derrick Rose to be healthy when it really matters, in the playoffs.

Rose hasn’t played in the postseason since his MVP season in 2010-11, aside from Game 1 against Philadelphia when he tore his ACL), and as a result the Bulls have won 1 playoff series in that span.  That is why the Bulls and Rose are being smart by holding Rose out of games unless he is completely healthy so far this season.

After two knee surgeries, a sprained ankle, and now a hamstring injury, Rose needs to get all the rest he can to limit the risk of him going out with yet another serious injury and missing the biggest games of the season for the Bulls.  Rose has played in 5 of 13 games so far this season, and has missed time with ankle sprains, and recently an aggravated hamstring.  The added rest that he’s getting now may even help him be more fresh than many other players in the Playoffs.

Now, that’s not to say it isn’t annoying as a fan.  I will admit, watching the Bulls with Derrick Rose in the lineup is much more entertaining than watching a team with Kirk Hinrich running the point.  I myself have not watched a couple of the games with Rose on the sideline because they aren’t as exciting.  Maybe that makes me a bad fan, but let’s all admit that without Rose, the Bulls are a pretty boring team filled with mostly a high effort, scrappy group of players.

But Rose makes them a watchable product, he adds to their offense in ways that few players can.  Not only does he score around 20 points a night, he opens up the floor to get guys like Pau Gasol, Jimmy Butler, and Taj Gibson more open looks.  I’m sure I can speak for most Bulls fans when I say that seeing Derrick limp off the court last Thursday in Toronto produced eerie flashbacks to last year’s game in Portland or Game 1 of the 2012 playoff series against Philadelphia.  At least this time Rose escaped with a minor hamstring injury.

Now the other argument here is that Rose hasn’t shown that he has been able to handle the rigors of an NBA season since his MVP season.  Many proponents of this argument will point to the fact that the year he tore his ACL, he never was consistently in the lineup, playing in only 39 of a possible 66 games.  He then missed the entire 2012-13 season, and played in 10 of the first 11 games last season before injuring his knee, causing him to miss the final 71 games.

This year, he has only played in 5 of 13 games so far, and has not been able to finish 2 games in a row yet, which is concerning.  However I believe, perhaps wrongly so, that Rose has matured and learned from previous experiences.  It’s safe to say that even last year he probably would’ve tried to play through his sprained ankle that caused him to miss four games and perhaps would have played in last night’s game in Sacramento, but he has learned that not every game matters (contrary to what his coach believes), and that he needs to save himself for the postseason.