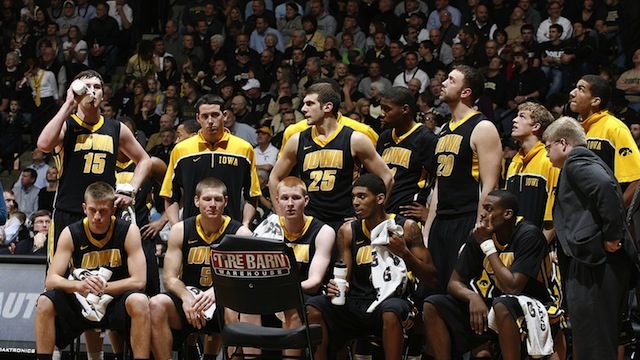 Days before Friday’s regular season tip off for Fran McCaffery’s Iowa Hawkeyes, many of the pre-season bets and predictions have been cast. The results for Iowa thus far are scattered.

It seems impossible to handicap these Hawkeyes because of all the uncertainty they enter the year with. The biggest storyline coming into this season is about replacing the guy noticeably absent from Carver-Hawkeye Arena.

Devyn Marble is gone to the NBA, including his ability to single-handedly carry the team on both ends of the floor. Numbers aside, the eye test alone argues that Marble did everything for Iowa last year.

When McCaffery’s guard play turned from inconsistent to dumbfounding, there was Marble to right the ship and run the offense. This year, the uncertainty at the position includes the murky leadership skills of Mike Gesell, Anthony Clemmons and Josh Ogelsby. The guards have embodied the team’s unpredictability the last two years, and this year may not be different.

In games when Aaron White was passive and become a non-factor offensively, there was Marble to take over with aggressive, dominant drives to the bucket time after time. It was Devyn Marble’s leadership that was either the difference in the wins or kept them treading water in the tight ballgames.

This season, White is expected to be the guy that can quench the inevitable scoring drought. In the First Four loss to Tennessee, when even Marble couldn’t convert, White took five shots. Until he demonstrates a conscious ability to attack the rim and be the primary scoring option, I’m not sure Aaron White can lead the line at Regina Preschool.

If there is any beacon of hope without Devyn Marble it comes in the form of Adam Woodbury. His 8-11 performance for 16 points and 8 rebounds against the Volunteers showed a flash of his potential. Woodbury is a junior now, and people’s expectations of him could not be higher.

Without Woodbury as a viable, offensive option, Iowa is toast.

Nationally, let’s pump the breaks on the team’s perceived potential. Especially Greenberg, who is probably the only one in the Union who believes this team has enough on paper to win the conference. Rightfully so, there are more questions than answers when considering the program’s recent coaching decisions, failures in late game execution and lack of individual leadership.

Iowa will most likely finish in the lower middle of the conference, just like the last three years when they finished sixth twice and eighth in 2011-2012. Additionally, the Big Ten Tournament will likely decide if Iowa makes the holy field of 68.

Still months from the madness, let’s tip the ball and see what the season has in store. If this Iowa team is anything like their predecessor, they may conclude the season with just as many questions about their potential as possess right now.