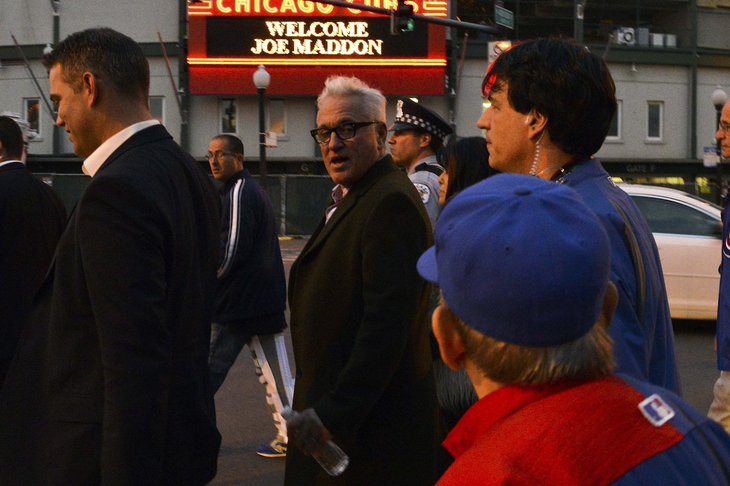 Joe Maddon was announced as the 54th Cubs manager at a press conference on Monday in Chicago. Following a difficult decision to stay loyal to former manager Rick Renteria or move on to a proven winner in Joe Maddon, President of Baseball Operations Theo Epstein decided it was time to reward Cubs fans for their patience and finally embark on the ultimate goal of bringing a World Series to the North Side.

What does the hiring of former Tampa Bay Rays skipper mean to Cubs fans?

Well, to keep it simple, it means hope. Cubs fans have constantly been blinded by the deceptive message of “Wait ‘til next year!” Again and again, the organization has been telling fans to “just wait,” but again and again, teams have underperformed, come up short, or in most cases, have just been downright awful.

After yet another season finishing in the cellar of a strong N.L. Central Division, the infamous message that has been ringing in Cubs fans ears for years may actually be coming to light.

Theo and company has built the top rated best farm systems in all of baseball. Young players such as Jorge Soler, Javier Baez and Arismendy Alcantara have already gotten the call to the show and have shown signs of what is to come. Other young sluggers such as Kris Bryant and Addison Russell are still lurking in the minors, waiting for their turn to contribute.

The young guys are there. The bullpen is loaded with young talent. What the Cubs needed next was a type of leadership in the form of a proven winner. They hit a home run with Joe Maddon.

Maddon is the guy that is ready to take this team to another level. His positive attitude, great sense of humor, relaxed and humbled personality, coupled with his statistical genius way of approaching a baseball game, goes with the fact that Joe Maddon knows how to win.

He turned around a franchise in Tampa with an abysmal payroll, low attendance, and a shaky roster. He brought it to the World Series in a matter of years. Maddon has a career record of 781-729; two Manager of the Year awards and has managed an All-Star Game. Give him a young team with an outstanding farm system, a stadium that sells out consistently, and a ton of money to spend in the free-agent market, and you have a match made in heaven.

The Cubs will be looking to add top arms such as Jon Lester and/or James Shields to anchor the rotation this offseason. If that gets accomplished, Joe Maddon will turn the page on this franchise, as he has proven to do in the past.

For the Cubs faithful, this hiring brings light to the dark tunnel of being a Cubs fan.  The fan base, which can sell out Wrigley Field even in the lowest of seasons, deserves to see a winning team. Not a team that throws money at free agents hoping to build a one and done team, but a team that has been built from scratch and will win for years to come i.e. the Kansas City Royals, Oakland Athletics, Tampa Bay Rays, and Pittsburgh Pirates.

Renovations are underway at Wrigley Field and the surrounding Wrigleyville, but what fans are really anticipating are the renovations being done to the roster. So, as fans pile into Wrigley Field on opening day 2015 feeling the breeze coming off of Lake Michigan, many will be intrigued by the brand new scoreboard towering over the left field bleachers. But every single one of those fans will have their attention focused primarily on the Cubs dugout, watching as Joe Maddon sends out his team to begin the new era of Cubs baseball.

Sure, the pressure is there. Every single fan wearing Cubbie-blue colors is already anticipating nothing short of a World Series in the Joe Maddon era. But if there is any manager in the game that can handle the pressure of fans and media and go out there day in and day out and just win, it’s Joe Maddon. Pressure creates losers; pressure creates diamonds. The Chicago Cubs have themselves a diamond.