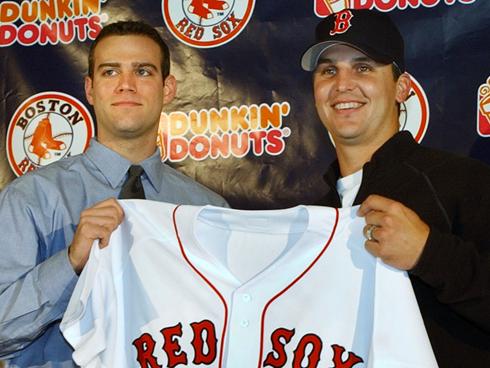 In late May, the 2004 World Champion Red Sox were honored at Fenway Park. Being the ten-year anniversary celebration of the miraculous comeback, all of the major “Idiots” returned.

Manny Ramirez, the World Series MVP, headlined the reunion. Days after agreeing to become the AAA player/manager for the Iowa Cubs, Manny returned to his old stomping grounds for the first time, sharing tales of regret over his actions that led to his infamous trade to the Dodgers in July, 2008.

Of course, Pedro Martinez and Kevin Millar were there. Two years after stumbling through the centennial toast, both personalities continued the narrative of when David slain Goliath with four consecutive victories.

Against the odds, Curt Schilling appeared from within the Green Monster, too. It was Schilling’s first public appearance after multiple rounds of chemotherapy. With the aid of his son, Big Schill strolled to the mound accompanied by the loudest ovations of the day.

Oddly enough, in the swarm of stories written following Boston’s first world championship in 86 years, there remains a key contributor everyone seems to neglect. Despite all the other immortalized Idiots, it was closer, Keith Foulke who emerged with the championship trophy raised above his head.

If the 2003, Cowboy Up Red Sox had a fatal flaw, it was the lack of a solidified closer. Boston was content to use a bullpen by committee during their run. Five outs from the World Series and a gassed Martinez standing on the rubber in the decisive seventh game is when it all fell apart.

Yes, receiving Curt Schilling from the Diamondbacks on Thanksgiving that November was a reason to give thanks by itself. But to get over the Yankees, Boston needed Keith Foulke.

In 2003 with Oakland, he led the American League in saves. Despite being a changeup-oriented closer, Foulke was brought in to solidify a veteran bullpen. He is lauded for famously leaping into the arms of Jason Varitek ten years ago. Truthfully, he should really be remembered for the high price he paid to get there.

In a span of 72 hours to send the ALCS to a second consecutive game 7, Foulke threw five shutout innings on 100 pitches against the Yankees.

He gave up one hit.

Then, in the afterthought World Series, Keith Foulke pitched in all four games against St. Louis. The only earned run he allowed was a solo homerun to Larry Walker in the final inning of a three-run Boston victory.

That effort is worth as much as a little blood.

Sadly, Foulke’s arm caved after that. In 2005, Foulke pitched in 42 games, and his ERA hovered around six for most of the year. The next year, in a summer series in Texas, Foulke gave up eight hits and six runs before going on the disabled list. He failed to record a save in 2006, and lost his closer spot to Jonathan Papelbon.

During the Idiots run to immortality, it was easy to neglect quiet Foulke when compared with the wall of outgoing personalities. With the likes of Schilling or Millar jumping at the chance of a sound bite, Foulke was often left alone.

But, like Roberts’ wheels or Papi’s bat, 2004 would have remained another footnote in the seemingly unending search for a championship without Foulke’s arm.

In his first season in Boston, all he did was trade the rest of his career for a championship. Years from now, when we remain captivated by the 2004 Red Sox and the cultural change in Boston that followed, Keith Foulke’s sacrifice will endure.