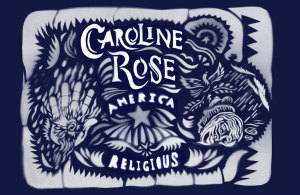 to decide if Caroline Rose is first and foremost a poet or a musician.

Each lyric of her track, “America Religious,” which is this week’s Tack of the Week, and is featured on her August-released album, I Will Not Be Afraid, eloquently layers political statements into the image of a disillusioned country, all (perhaps ironically) set to a soundtrack of the American frontier, when the land was still fertile enough to yield the hopes of so many.

“America religious, I eat slices of white privilege processed by agribusiness (ain’t this what you’d always dreamed it’d be?)” Caroline sings, almost satirically, over a steady acoustic guitar and fiddle accompaniment. “America Religious” is both an instrumental revival of the Country & Western genre and a nostalgic ode to a culture which no longer exists.

Listen to “America Religious” below: