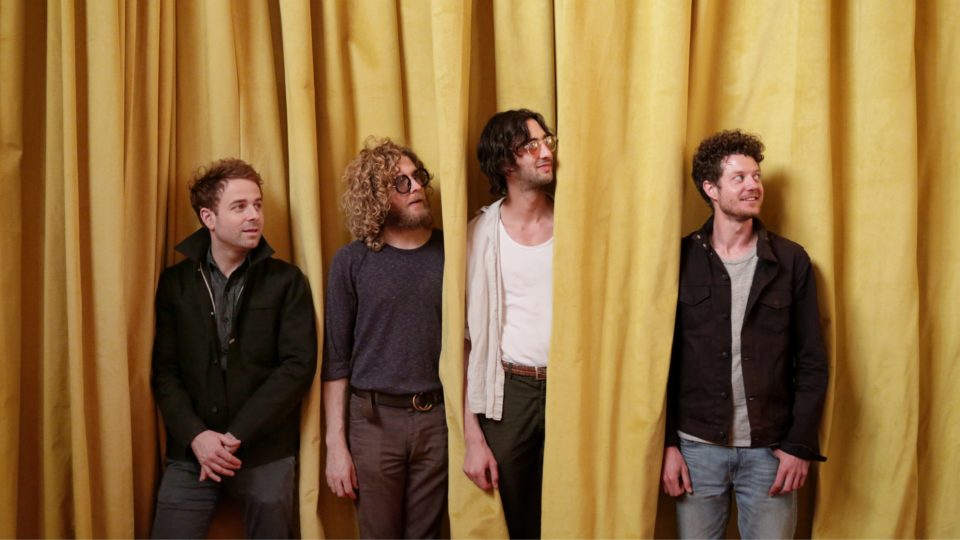 Dawes made a very triumphant return to the Englert Theater in Iowa City tonight. The last time they were here, in that very same theater, the balcony seats weren’t even available to purchase. Tonight, they nearly sold out every seat. The theater was packed almost to capacity, and the band put on a show to remember.

I was milling around the building before the show started, and headed up to the second floor where a beer tasting was happening, put on by Oskar Blues Brewery, a sponsor of the show. I didn’t even know there was an art gallery in the Englert, and the space was tight with people. The lines were much too long for me so I passed up on that, but I was glad to see a full house for one of my favorite bands.

Dawes’ latest and fifth record, “We’re All Gonna Die” is their biggest departure in sound, but it feels natural. After four albums of Americana hits, from large anthems to quaint, reassuring acoustic numbers, Dawes has finally mixed it all together to make a sound so unique and fresh that is at the same time close to their roots.

I saw Dawes a few years back in Omaha, where they were the opening act and back up band for Conor Oberst on one of his solo tours. I was already a fan at that point, but was still impressed by the show they put on. All of the expectations I had for this show were completely blown out of the water before the show had started. With two risers of drums, keys, and amps, all laid out in front of a large white screen which would become host to a show of wild and rhythmic colors, the stage set-up alone showed their growth.

Dawes did not bring an opening act for this show, and for good reason: they were here to show us that they could hold their own, and rock out on their five albums full of hits without needing anyone else. In a way it called out to the marathon concerts of greats like Bruce Springsteen, but it would be a crime to really compare this band to anyone else.

Dawes played two sets tonight, and opened the first one with the first song on their new album. “One Of Us” is a perfect example of the evolution of Dawes: it has Taylor’s classic voice, as always, and that prophetic yet humble tone that the band brings to every piece. This time around, though, the songs expand into longer jam sessions with electronic drums, keyboards, and other sounds not previously heard on Dawes records.

The crowd was very receptive from the start, even if it did take them till “When My Time Comes” to actually get out of their seats and dance. Whatever we gave them, Dawes gave it right back. The energy was tremendous and only got better throughout.

Taylor’s voice is probably the most distinctive part of the band. Even live, his voice alone sounds like a choir. He’s matched with harmonies from different members of the band at different points in the set, but he’s always on top of the chord leading the notes. His lyrics, which rival the breadth and insight of folk music’s greatest songwriters, still feel urgent when performed live. Songs new and old both feel like they’re coming from a part of the band that is anything but mundane and indifferent.

At this point in their career, Dawes are masters of their set. They easily weave in and out of moods like they’re skating on ice, bringing the crowd along through all the theatrics. The way they order the songs was perfectly tempered, allowing space to breathe and laugh after some of the deeper cuts. At one point, Taylor sang through half of their song “: Time Spent in Los Angeles” before moving immediately into “Most People”. That transition proved their professionalism and consciousness of sound.

Check out their music video for “Time Spent in Los Angeles”.

After a short intermission, the band came back out in a different form. They performed semi-acoustic renditions of songs that are normally full band, aided by building harmonies as each member got back on stage and back into their spot.

This showed their talent and diversity within their own canon. Not only are their albums wonderful, cohesive pieces, but their live shows are complex and flat out entertaining.

There was an endless supply of sing along sections that the band seemed very proud of. Sometimes they’d step away from the mic and let the crowd take over, like they did at the very end of the show with “All Your Favorite Bands”, in which the last line is “…and may all your favorite bands stay together.” It was fitting as they held up their instruments, waved goodbye, and left the stage.