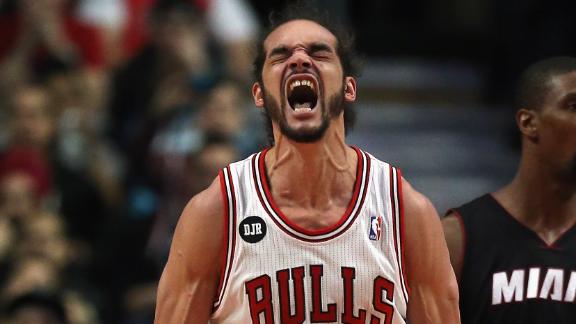 This week, the Wizards hosted the Bulls in NBA preseason action in what was sure to be swallowed up in ratings by Monday Night Football, and the MLB Postseason. But Joakim Noah made his game more than watchable.

Early in the first, Paul Pierce responded to what he thought was a hard foul with an aggressive hug of Jimmy Butler, causing a foul, and a media time out. Now to most players, they let that go, shrug it off, and continue playing preseason basketball, but not for Noah.

Noah had some choice words for Pierce, leading to a menacing missed eye-poke from Pierce, which cleared the benches. Now aside from allowing us to see the spectacle that is Mike Dunleavy attempting to break up a fight, the fight is only a positive for the NBA.

The NBA is full of talent, every team has some of the best athletes in the world (except for the Jazz), but it takes more than talent to pull viewers. Adam Silver needs rivalries, and bad blood to draw people in. Those who watched Paul Pierce go for the eyes  may keep their eyes (no pun intended) peeled for the next time these two teams meet.

Joakim Noah is the leader of bad blood. He may hate everybody who isn’t a Bull. He’s done a good job as of late, from insulting the Metropolis that is Cleveland to calling the Heat “Hollywood”, if he doesn’t like you, he’ll let you know. This draws attention, this makes a regular season game more exciting, and if they meet in the playoffs, it’ll amplify how the players perform.

It’s hard to not smile, at the possible reaction Cleveland would give Noah if they met in the Eastern Conference Playoffs, and how many casual fans would bite at the chance to see around 20,000 people booing Noah.

Noah, simply put, makes games more interesting, and there should be more of him. If  Rajon Rondo explained a dislike for Kobe, that would exponentially increase the interest of the teams meeting in the regular season, and so on. 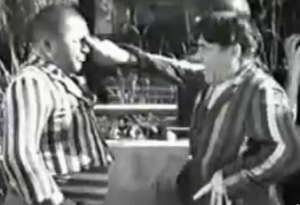 Now, there are limits. Rivalries are good, and so are eye-pokes, but there should never be bad blood enough to result in fights, the players shouldn’t like each other, but there shouldn’t be hate. The last thing Adam Silver wants is blood to spill because the Bobcats hate the Hornets.

When people think of the best eras of basketball, they think of Bird/Magic, Jordan/everyone in the 90’s, Iverson/sanity. I’m not saying that Bulls vs. Wizards will be the next great thing, but if players take the intense mindset of Noah, an already fun rivalry in the NBA, like Bulls/Cavs will be amplified, and can rise to a great height.

So come on NBA players, dislike each other more, get physical, make an intense game of Basketball even more so.