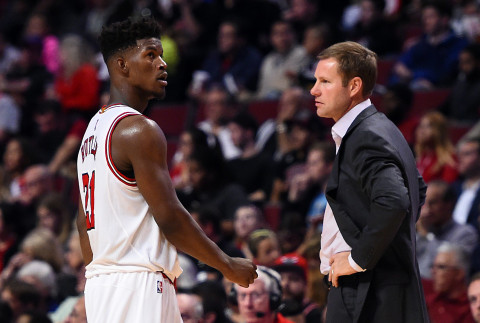 Throughout the past couple of weeks, the Chicago Bulls have been a mess. They did win their last two games before this weekend’s all-star game, but one win was on a bad call, and the other a win against a struggling Raptor team. Despite those two wins, the Bulls find themselves 7th in the conference.

Considering the hype this team had going into the season, for many Bulls fans, this is a disappointment. Personally, I am not as shocked as many people are; when the Bulls went all out and signed a washed up Dwayne Wade and an injury riddled Rondo, I knew the best the Bulls could expect for the next two years was maybe a 5th seed. But the season has been worse than expected, between being a game below .500 and constant drama between the players, the season seems to be on the downward spiral toward a second straight year without a playoff berth and without a top 10 draft pick.

In basketball, nothing is gained from mediocrity, picks 15-30 even in the first round usually don’t provide that big an impact in the NBA. If the Bulls want to be a successful franchise again, they need to push the reset button, and yes, that includes Jimmy Butler.

For many Bull fans, this idea seems crazy. Jimmy Butler is the future! Why would you trade someone who could be a superstar in this league? While it’s true Jimmy Butler has super star potential, I don’t believe he has leadership potential. He has stated in an interview that he likes controversy in a locker room. That kind of thought process is unacceptable for the face of a franchise. A leader is supposed to unite and rally a locker room, not tear it apart.

Another reason to trade Butler is the return the Bulls could possibly get from him. If the Bulls moved him this year, one of the most realistic landing spots for him would be Boston, a place that has a plethora of draft picks and assets to give the Bulls in return. Right now, the Boston Celtics, who are currently the second seed in the East, hold the Brooklyn Nets’ 2017 1st round pick; the Nets have the worst record in the NBA and will probably get the first pick in the upcoming draft. The Celtics could possibly trade that to the Bulls along with other draft picks to the Bulls for Butler, possibly giving the Bulls the first pick in what is supposed to be a very good draft class.

I think the Bulls would also do well to get rid of Rondo and Hoiberg. Rondo has made it clear that he wants out of Chicago, and Hoiberg has potential to be a good coach somewhere else, but it’s clear it hasn’t worked in Chicago. I think the Bulls should keep Wade as after this year he only has one more left on his contract, and he could be a good mentor to the young incoming players. A few years ago, the Bulls were legit championship contenders and had the youngest MVP in league history on their team. Six years later, they’re struggling to maintain a playoff spot.  Chicago Bull fans and their front office need to understand their window to win a championship is over and it’s time to start the long, arduous, rebuilding process