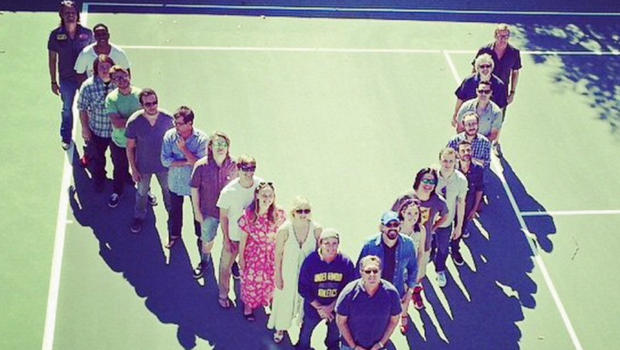 A little over a week ago, I saw that the cast of D2: The Mighty Ducks had a twentieth anniversary reunion, where they got together to take pictures and form a giant “Flying V.”

That got me all nostalgic about the movie because I loved this movie as a kid. For example, when I would check it out from the library, my mom would write little “ditto” marks on the checkout sheet, as in “the same kid who checked it out the last five times.”

As you probably guess, I have seen D2 a few times, but through my years of growing up, “maturing,” and becoming more educated on how things actually work in life, I’ve come to realize that, alas, this movie has its flaws.

That’s why I thought it would be fun to dust off the old VCR (not really) and revisit this classic 20 years after it was first released and probably 15 years since I was obsessed with it as a first grader.

If you haven’t seen the first Mighty Ducks movie, you should stop reading this right now and get on that, but if you’re unlike me and have priorities, I’ll catch you up.

Gordon Bombay (Emilio Estevez) is a former hockey star assigned to coach a local youth hockey team full of misfits against his will. These kids are horrible at hockey, but as anyone knows, changing the team’s name from “District Five” to the Ducks and implementing a team-unifying duck chant can turn any team into winners. Bombay and team captain Charlie Conway (Joshua Jackson) lead the Ducks to an improbable league championship that almost seemed like something out of a Disney movie.

That brings us to D2, which starts out with Bombay getting injured in his quest for another shot at the NHL While in rehab, he visits his old mentor Jan in his home state of Minnesota. Jan is basically a Swedish hockey Yoda, and Bombay finds Jan training his apprentice Charlie Conway in the art of skate sharpening. The gang of main characters is back together. We have a sequel.

While staying with Jan, Bombay gets a visit from a Mr. Tibbles. We find out Tibbles owns “Hendricks,” a hockey merchandise company, and he wants Bombay to be the next head coach of Team USA hockey. “I want to make you a household name,” says Tibbles.

It’s for Team USA in the Junior Goodwill Games, whatever that is. This is a terrible marketing decision Mr. Tibbles, especially since I can almost guarantee that over 95% of Americans do not know the current head coach of the U.S. Olympic hockey team (It was Dan Bylsma in Sochi. I looked it up.).

After this encounter, we meet Team USA, which is inexplicably made up of the entire Mighty Ducks team from the first movie, as well as about 10 more players from all over the country. You’re telling me this entire local peewee league team that barely won its league championship the year before is up to national team standard over every single other player in the county? I’m not buying it.

As the new players are introduced to the Ducks and Bombay, we meet Julie “The Cat” Gaffney. She is actually known as “The Cat” for her fast reflexes, an important skill in goaltending. Bombay’s current goalie, Goldberg, whom he starts for every game of the tournament, is best known for farting in enclosed spaces. The entire team knows to accuse him every time they smell something raunchy. The goalie situation is an issue.

The old Mighty Ducks team scrimmages the new members of Team USA and instantly gets smoked. It’s not close. At one point, Bombay asks Lester Averman if they’ve trained at all in the offseason, and he says no. Really Averman, your whole point of existence in the first movie is to call the other team stupid names, and you haven’t trained at all?

After a practice consisting of tying the whole team together and making them skate in the same direction followed with a session of line dancing on the ice while a player named “Rancher Duane” from Texas tries to lasso everybody, Team USA is ready for its first game against Trinidad and Tobago.

Yes, Team USA is playing a team from a country with no ice that doesn’t have an ice hockey team. A Google search of Trinidad and Tobago hockey doesn’t even have ice on the first page. Well-played Disney.

After a few games of blasting the underwhelming competition, Team USA squares off against the heavy favorites, Iceland, coached by Wolf Stansson. Wolf is stereotypically stoic with greased-back hair, and he got kicked out of the NHL after one season for fighting too many players. This is who Iceland is allowing to coach its youth.

Iceland is an all-male team that towers over Team USA and destroys the USA 12-1 in the first meeting. Julie “The Cat” meets with Bombay before the game requesting a shot at playing, but Bombay turns her down, saying Goldberg is on a hot streak.

Bombay doesn’t remove Goldberg until after he allows eight goals, and once he does, Julie shoves two guys down and immediately gets ejected. Goldberg proceeds to allow four more goals, but he starts every game afterwards. I don’t get it.

After the Iceland game, Team USA gets a lesson in toughness from Russ Tyler (Keenan Thompson) and his brothers’ South Central Los Angeles street hockey team. This lesson combined with some soul searching by Bombay helps Team USA beat a couple other teams on the way to a championship rematch with Iceland.

The rematch with Iceland starts out the same as the first game. Goldberg allows four goals in the first period alone, yet Bombay keeps Julie on the sidelines. I would say Bombay was sexist if Connie Moreau wasn’t already playing for the U.S. That means he must be stupid. Goldberg sucks, end of story.

Speaking of Connie, she is trapped up against the board towards the end of the second period. As an Iceland player starts closing in to check her into the boards, Rancher Duane hops up off the bench, skates onto the ice, and lassos the guy. The referee gives him two minutes in the penalty box.  Most of my hockey knowledge comes from NHL 98 for Windows 95, but this doesn’t seem right.  Bombay and the refs have lost control of this one.

After the second period, USA heads to the locker room down three goals. The team is riled up after Duane’s lasso fiasco, but Bombay tells them they’re fired up for the wrong reason. He then has the entire team introduce themselves and say where they’re from.

Instead of being logical and telling the team that the United States of America is the greatest country on earth because it is a melting pot of different people and cultures that works together through difficult times to create something great just like the team in front of him is capable of doing, Bombay tells them that, “Ducks fly together.”

This worked for me when I was six, but don’t fault me for not being riveted now. Then, wise, Hockey Yoda Jan comes in with brand new Mighty Duck jerseys that the whole team wears for the third period.

That’s right. The entire team denounces its country and discards its Team USA jerseys to be associated with the Ducks. This is treason.

Before the third period, “We Will Rock You,” by Queen plays throughout the arena. The fans start stomping, clapping, and chanting, “We Will Quack You.” This is an important element in sports movies. Rhythmic clapping directly correlates with winning games.

The newly christened Ducks predictably come back to tie the game in the third period despite Goldberg allowing yet another goal. I’m not sure why Julie hasn’t left the team by now.

The game goes directly into a shootout without overtime. NHL fans would riot if this were commonplace. The teams trade shots until the game eventually comes down to whether or not Iceland can score on its last attempt.

At this point, Bombay finally has a glorious epiphany that tells him that he should play Julie over Goldberg, despite the fact that anyone with half a brain would have done it for the first game of the tournament. He literally waited until the last possible moment to use his all-star goalie.

Sure enough, Iceland’s best player, Gunnar Stahl (great name) tries to sneak one past Julie’s glove side, and she spears it out of the air. The girl nicknamed “The Cat” has better reflexes than the kid known for eating and farting. Color me shocked.

Team USA wins, and Charlie Conway (who gave up his spot on the team to add Russ Tyler) starts skating around the rink with an American flag.  Apparently everyone is back on Team USA now.

That’s really the end of the movie. There’s just so much wrong.

That said, I still love this movie for the nostalgia and the parts with the kids doing dumb, immature kid stuff. This is how I learned about the shaving cream/feather prank to get someone to slap shaving cream all over his face. Anybody ages 20-30 who says, they haven’t said, “It’s knuckle-puck time,” is lying. The “Bash Brothers” bro-ing out and running kids over on the ice is great.

Just don’t get me started on D3.