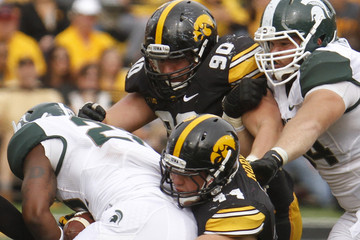 The conversation surrounding the Iowa Hawkeyes defense has been one of skepticism since the departure of the linebacker trio of Christian Kirksey, Anthony Hitchens, and James Morris. However, the 2014 Iowa Hawkeyes defensive unit looked to silence the critics with a strong fourth quarter performance against the in-state rival UNI Panthers.

Despite giving up a game high 203 yards of receiving to Panther’s star running back David Johnson, the Hawkeyes capped off the fourth quarter with a game sealing interception courtesy of sophomore defensive back Greg Mabin.

Leading the way on the defensive side of the ball was Louis Trinca-Pasat with 10 total tackles and 1.5 sacks on the day. Trinca-Pasat’s presence was most felt late in the fourth quarter as he and sophomore Jaleel Johnson teamed up for a sack setting up the Mabin interception.

After the game, Iowa head coach Kirk Ferentz spoke of the defense stepping up. “(I was) pleased to see the defense anchoring there a little bit,” Ferentz said. “There are some good teaching moments to learn from, but the most important thing is that they played hard down the stretch.”

Despite giving up 405 total yards to the UNI Panthers, a team that showed moments of explosion throughout the game, the Hawkeyes defensive players put together a sound game when they needed it the most.

With the first game out of the way in the very young 2014 season, the Iowa Hawkeyes now shift their focus towards Ball State led by sophomore quarterback Ozzie Smith and a Cardinals team that found success week one with a 30-10 win over Colgate.

The Iowa Hawkeyes will return to action in Kinnick Stadium on September 06 as they take on Ball State with the game slated for a 2:30 p.m. kickoff.