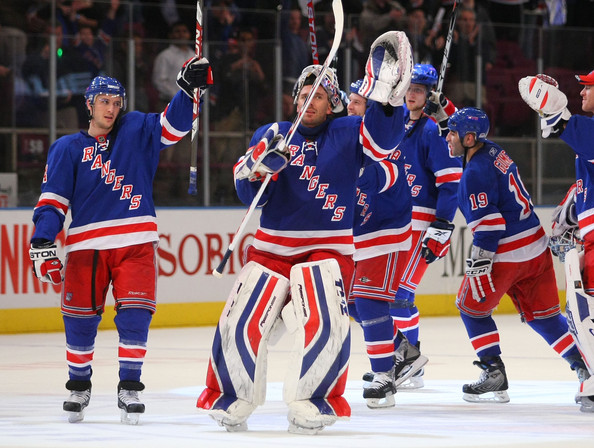 Sitting in Tampa Bay Times Forum on a Sunday evening back in December, I took in game between the New York Rangers and Tampa Bay Lightning. In that game, Rangers star goaltender Henrik Lundqvist, in his first game back from injury, made 37 saves and the blue shirts power play went a perfect 3-3 in route to a hard fought 4-3 victory. In what may have seemed like a meaningless regular season win to many, what I saw that evening made me believe that this version of the Rangers could defy the odds and bring the Stanley Cup back to Broadway for the first time in over 20 years.

We now find ourselves on the cusp of a Stanley Cup Final featuring two teams that weren’t supposed to be here. The Los Angeles Kings, who are coming off an incredible 7-game series, where they defeated the defending Cup champion Chicago Blackhawks in route to their third Game 7 road win of these playoffs. From the East, come the New York Rangers, the team that has emerged from what was a decidedly down Eastern Conference this season, but had to survive tough-fought 7-game series with both the Philadelphia Flyers and Pittsburgh Penguins, before discarding the Montreal Canadiens, hampered by injured goaltender Carey Price, in six to reach this Cup Final.
Although, the Kings enter the Cup Finals as heavy favorites and still feature many of the key contributors that helped them win the Cup back in 2012, this is why I believe that the Rangers will beat the odds one more time and lift Lord Stanley’s Cup.

Although, the Rangers don’t boast a go-to number one center like the King’s Anze Kopitar (who still currently leads the playoffs in points), or the suddenly found goal scoring prowess of Jeff Carter and newly acquired Marian Gaborik, they do have a scary-deep group of forwards that can roll four strong lines, and each of whom have contributed timely goals throughout these playoffs. Newly acquired Martin St. Louis, Ryan McDonagh, and Derek Stepan currently are tied for the team lead in playoff points with 13, and eight players in total currently have double digit points. I believe that if the Rangers top line of Stepan, Chris Kreider, and Rick Nash can keep up with the likes of Kopitar and the Kings other top forwards, and can also continue to get huge goal scoring contributions from the likes of guys such as Zuccarello, Derick Brassard, and Brad Richards, then I believe that the Rangers offense could outlast that of the highly potent Kings.

Although, the Rangers defense leading into this series has once again been perhaps overshadowed by the spectacular play of King’s defenseman Drew Doughty, who showed in the series against the Blackhawks just why he is one of the best-in the-world, the Rangers defense has been quietly solid, due in large part to the pairing of McDonagh and Dan Girardi. McDonagh like Doughty, is a spectacular two-way defenseman and him along with Girardi both still possess the shot-blocking prowess stressed almost to a fault by former head coach John Tortorella. The Rangers also feature the defensive pairing of Marc Staal and Anton Stralman who may be just as if not more important than the top line in stopping the Kings onslaught. Much like on the offensive side of the puck, what the Rangers defense lacks in talent it makes up for in depth and benefit from guys like McDonagh who can be a lock-down defender when he needs to be. The Rangers defense has also been near the top thus far in these playoffs allowing just 2.25 goals against per game. So although, the Rangers have yet to face a team with the offensive firepower like that of the Kings, if the defense can lock down just enough and avoid the scoring bunches that doomed the Blackhawks throughout the Western Conference Final, then I believe that the Rangers may have the edge defensively.

In what may prove to be the biggest factor of which team wins this series and walks away with the Cup may be that of the special teams units. The Rangers power play which ranked 15th in the regular season and just 10th among playoff teams, currently with a 13.6% conversion rate, and featured an abysmal 0-36 drought to begin the playoffs before coming alive at the end of the Penguins series, must be far more consistent if they hope to keep up with the Kings offensively and make this a long series. It will be up to the likes of Martin St. Louis and Brad Richards to continue to make the Rangers power play a credible threat against an unspectacular Los Angeles penalty kill unit killing just 81.2 percent of penalties in these playoffs.

For as inconsistent the Rangers power play has been this post-season, that’s just how good their penalty kill has been. The Rangers tremendous penalty kill unit has picked up right where they left off from the regular season where they were third in the league killing 85.3 percent of penalties, and now rank second in the playoffs killing 85.9 percent of their penalties. This unit is spearheaded by the aforementioned dynamic-duo of Girardi and McDonagh, as well as Bryan Boyle, Dominic Moore, and Carl Hagelin. Although, the Kings power play came alive somewhat during their series win over the Blackhawks and they are converting 25.4 percent of their power play opportunities in the playoffs so far, I believe that it will be hard for the Kings to keep up this consistency and the Rangers penalty kill will prove just too tough.

All eyes will be on the matchup between super star goalies Jonathan Quick for the Los Angeles Kings and Henrik Lundqvist for the Rangers, who surprisingly is making his first Stanley Cup Final appearance in the net after a consistently great career in the crease thus far. Many believe that King Henrik is the only reason that the Rangers have any kind of chance in this series and he does have to be spectacular just to keep his team in the series against a suddenly very powerful Kings offensive attack. Lundqvist has been spectacular thus far in the playoffs and currently boasts an impressive .928 save percentage and a blistering 2.03 goals against average in 20 playoff games this post season. He has also been referred to as “Mr. Game 7,” based on his perfect record in the last five Game 7’s that he has appeared in. Although, Jonathan Quick has a Stanley Cup ring and the reputation as one of if not the best goaltender currently in the world, he was decidedly below average against the Blackhawks, but it would not surprise me for Mr. Quick to return back to form once the bright lights of the Stanley Cup Final are shined upon him. I do believe however that Henrik Lundqvist will ultimately be able to outshine Jonathan Quick and will finally be able to lift his long awaited Stanley Cup.

Rangers head coach Alain Vigneault and his laid back style have been a breath of fresh air behind New York’s bench this season and he has reinvigorated an offense all but forgotten by previous and defensive-minded head coach John Tortroella. He has also instilled much-needed confidence in goaltender Henrik Lundqvist and has stepped back and allowed his veteran laden team to play their game. I believe that Vigneault still has a bad taste in his mouth after losing a heart breaking 7-game series in the Stanley Cup Finals in 2011 while at the helm of the Vancouver Canucks. So, although Kings coach Darryl Sutter has a Stanley Cup ring and an impressive record since returning to behind the bench, I believe that Vigneault is better suited tinkering with his lines and making the necessary adjustments that will be crucial as the series goes on.

This is why although the Kings may appear to be the better team on paper; I believe that the Rangers have recaptured some of the magic that helped them win the Cup back in 1994, and this along with a confident Henrik Lundqvist will allow the New York Rangers to lift Lord Stanley’s Cup for the first time in over 20 years and once again be able to bask in the ticker tape on their parade through the Canyon of Heroes.

Either way, we’re in for one heck of a Stanley Cup Final