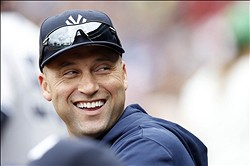 By no means am I a New York Yankee fan, but I felt that this was a story that was too great to pass up.  “The Captain”, Derek Jeter, announced on Wednesday afternoon that the 2014 baseball season will be his final one.

Jeter played 19 seasons, excluding 2014, and all of them were in New York Yankee pinstripes.  He played the game harder than a lot of guys even thought about playing it.  He was fair, he played the game the right way, and was admired by many.  Whether you’ve only gotten a chance to see him play a few times or you’ve seen him in action numerous times.  It’s hard not to appreciate what Derek Jeter does for the game of baseball.

He burst onto the scene in 1995 and participated in just 15 games, but after that, he was in New York for good.  As a 22 year old, Jeter won the rookie of the year after a season in which he batted .314 with 10 home runs and 78 RBI’s.  Not only did he earn rookie of the year honors, but he also helped his team win the World Series that year.

Love him or hate him, Jeter was the man and one of the faces of baseball for so very long.  It would be nice to see him go out on top, but I’m not sure if that’ll happen, although, crazier things have taken place.

In no way, shape, or form will anything I write about this guy do him justice.  Jeter was a class act on and off the field over his 19 year career.

I want to end by sharing two of my favorite Jeter moments over the course of his career.  I think the first one would have to be in 2004 in a game against the Boston Red Sox when Jeter went diving into the stands to catch a ball that most guys probably don’t even think about trying for.  Jeter would have to leave the game, but that exemplifies the type of player that he was.  The other one is in 2001 when he earned the nickname “Mr. November”.  Jeter’s teammate, Tino Martinez, kept a World Series game alive in the ninth inning with a home run to center field and in the tenth, when the clock had struck midnight and it was no longer October 31st anymore, Jeter belted a game winning home run to right field and Mr. November was born.

Love or hate the Yankees, it will be really weird not seeing him out there after this upcoming baseball season comes to a close, but all I can say is, take in as many Yankee baseball games as possible this year because this guy is truly something special.