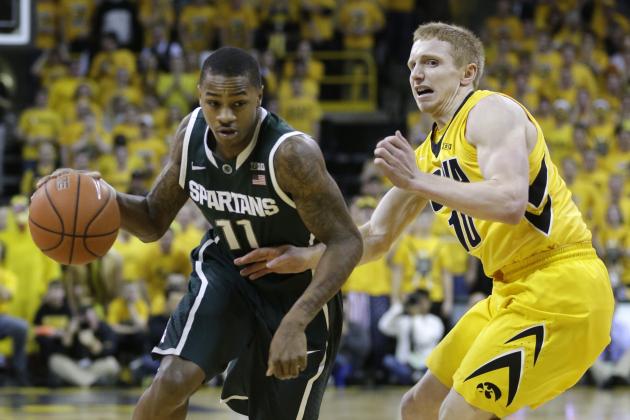 There was a certain buzz around campus the entire day and it carried over into Carver Hawkeye Arena when the gates opened.  The Iowa Hawkeyes were welcoming in the #7 ranked team in the nation.  Iowa, ranked 15th, was edged by the Spartans by a score of 71-69.

Iowa struggled out of the gate, but found their stride with about 7 minutes gone in the first half.  Iowa went on a 12-2 run over about a 6 minutes span.  But, the Spartans weren’t just going to go away that easy.  The two teams play a back and forth first half and Iowa took a four point lead into the locker room.

The second half brought more of the same excitement to the fans here at Carver Hawkeye Arena. With about 8 minutes left in the game, Iowa went on a 7-0 run to open up a 6 point lead.  Not so fast.  The Spartans answered with a 7-0 run of their own to take the lead back.

One glaring thing that stuck out in the second half and into overtime was the fact that Iowa hadn’t made a field goal in a while and somehow they were hanging in this game.  At the 9:54 mark, Zach McCabe buried a three pointer to ignite the home crowd.  Well, Iowa’s next field goal would come with 6 seconds left in overtime.  That’s a combined 14:08 without a field goal.

With 47 seconds left in the game, Mike Gesell would go to the line for two shots and the Hawkeyes trailing by 1.  Gesell would split the free throws to tie the game.  After a Keith Appling missed three pointer, the Hawkeyes had a chance to win it at the buzzer.

In the overtime, Michigan State would lead by 3 with about 35 seconds left when Russell Byrd, who had made 2 three pointers all season coming into tonight, buries a corner three to give the Spartans a 6 points lead.

Appling would step to the line to try and secure the game with 6 seconds left.  Michigan State was up two and the senior, Appling, was at the line.  Appling missed both throws and Iowa still had life.

With four seconds left, Mike Gesell took the inbounds past coast to coast and tossed up a fade away runner that missed which gave Sparty the W.  After the game Fran McCaffery questioned his teams toughness. “I didn’t think we were tough enough tonight. … Not enough to be this kind of team.”

Iowa was 2 for 10 on 50/50 balls tonight and that’s something that directly correlates to being tough.

Iowa will now try to turn things around as they’ll go to Champaign on Saturday night to take on the Fighting Illini.