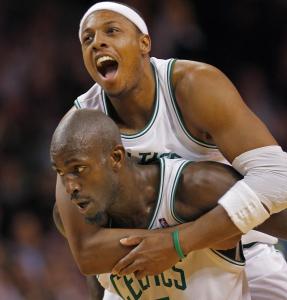 Two tributes in one night.

That was the tall task the people of Boston faced Sunday, when Kevin Garnett and Paul Pierce took to the parquet, the first since their valiant run with the Boston Celtics. Six months have passed since the summer afternoon when the Commonwealth shipped the two future hall of famers to Brooklyn, and the clock has been ticking since for the fans to give their proper thanks.

They got their chance Sunday, with two emotional video tributes—one for each player—followed by lengthy, thunderous ovations that had both players grinning. Yes their current team won the game, but the contest was merely a footnote to almost everyone due to the outpouring of love from their old outfit.

When Pierce and KG exited stage left following a first round playoff loss last year, you could feel the inevitability of what was to come. Nobody around Boston felt good about it, but we knew it was time to move on. The magical run had finally ended.

So much has been said about the journey these two players took to Boston, putting mediocre teams on their young shoulders, until the time in their careers when both Pierce and Garnett knew that after a decade of transition, it was time to embrace change towards a championship, wherever they could find it.

In my mind, this night was particularly special for Paul Pierce. He was at the heart of the lowest moments in history of the Celtics organization, notably a playoff exit in 2005 at the hands of the Pacers. In one of the most critical stages of that series, Pierce was issued a second technical and was ejected in the game’s waning moments, removing his jersey and waving it over his head on the way to the locker room. To many onlookers, he looked like a reluctant star that carried the slim hopes of a city on his shoulders for ten years, and had finally cracked.

That particular offseason, Pierce faced as much skepticism as he ever had. Trade rumors swirled around him, and after a subsequent season with just 24 wins, the Celtics were directionless, soon to be leaderless and by all accounts hopeless until Kevin Garnett and Ray Allen saved the day.

Not surprisingly, people neglect that part of the Pierce narrative now. That’s how significant the championship was. If nothing else, the championship in 2008 was a sigh of relief. It was validation for “The Truth”, finally bringing the 17th banner that we all had hoped he would. It was also a deep breath for Kevin Garnett, who endured in Minnesota what Pierce had struggled through in Beantown. A difference? It was Garnett who made the ultimate decision to leave his franchise. He made the leap that Pierce only threatened.

For hours following Pierce and Garnett’s last game in Celtic Green, they held a close door meeting with Rajon Rondo, now the lone holdover from the championship runs that seem so distant. Nobody knows what exchange the three had that night, or what proverbial keys were hurled towards the young guard, but it symbolized a passing of the torch, a paying forward of the reins to the organization. When Rondo emerged two weeks ago for his first game since tearing his ACL last year, the anointing was complete when he was named the new captain of the organization, taking hold of the role that Pierce held for so many years.

While each will have their own night in the future, when the 34 and 5 take their rightful places in the Garden rafters, Sunday was a big thank you to both players. Not just for a championship, or for the revitalization, but for the hope that they helped instill. The current Celtic rebuilding project just does not seem as daunting as it once was, the pit the organization dug itself does not feel as bottomless as it was the last time.

Why? Because Paul Pierce and Kevin Garnett still have their paw prints all over the TD Garden in Boston. It may be a road venue now, but if Sunday was any indication, Boston will forever be home to the two legends.