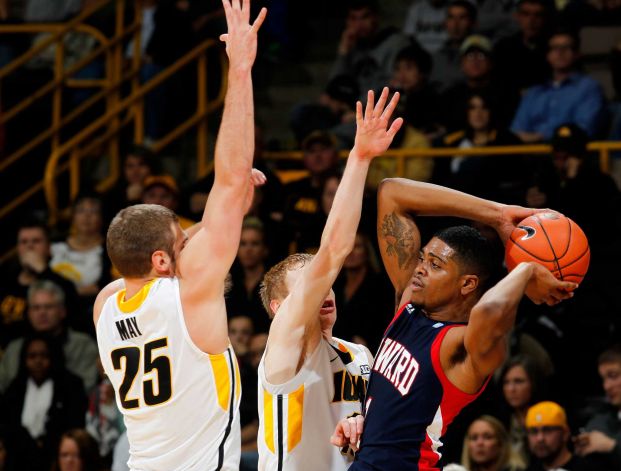 Early on, the Howard zone stymied the Hawkeyes. But that soon changed thanks to the aggressive play by Roy Devyn Marble, who led all scorers with 22 points, propelling the Hawkeyes to a 3-0 start with a 66-36 rout of Howard at Carver-Hawkeye Arena Thursday Night.

Marble began breaking down the Howard zone with a layup and an early trip to the free throw line, before hurting the Bison with a three point basket from beyond the arc. However, on a night where as a team the Hawkeyes shot just 4-21 from three- point- range, Coach Fran McCaffrey was not concerned with his team’s shot selection. “I don’t think it was poor shot selection, the only thing you could say was a couple times we shot it quick, but I’m very comfortable with our shots.”

Where long range shooting was lacking, the Hawkeyes made up for it with their defense. For the entire game, the team put pressure on Howard’s inbounds pass after every dead ball or a made basket. This pressure caused havoc, created multiple Howard turnovers and easy layups for Iowa.

When Howard did successfully inbound the ball, the Hawkeyes swarmed the Bison with a mixture of zone and man-to-man defense, forcing the Bison to struggle offensively all night. Howard shot 27% from the field for the contest. The airtight defense, along with a +13 rebounding advantage for the Hawkeyes allowed Iowa to create transition opportunities, something that Coach McCaffrey stressed was apart of the game plan from the beginning. “We felt like this was a game we could run. We really wanted to push the ball. They hit a couple shots, but we felt, with our tempo, like we were in control of the game.”

The first half concluded with a perfectly executed play to beat the buzzer. The Hawkeyes received the ball with just twenty-two seconds remaining in the half, and passed the ball on the perimeter, before Mike Gesell hit Freshman Adam Woodbury with a beautiful bounce pass, who converted the layup as the horn sounded. That play made it 36-16 Iowa at recess, and the team would maintain the same tempo and intensity for the remainder of the contest.

Just as Marble fueled the first half, Aaron White ignited the team in the second half. He ran the floor beautifully in the aforementioned fast tempo, finishing off the fast breaks with two emphatic dunks, one of which coming from Mike Gesell that both brought the building to its feet, and formally sealed the Bison’s fate.

Mike Phillips was the leading scorer for Howard, finishing with eleven points in defeat. The Bison fall to 0-2 on the young season, and will travel to Wichita, Kansas for a game Saturday with Wichita State. In the second game of the preliminary Cancun Challenge, the Hawkeyes will face Gardner Webb at Carver-Hawkeye Arena Saturday, in the final contest before the team flies to Cancun for games against Western Kentucky and with DePaul or Wichita State.