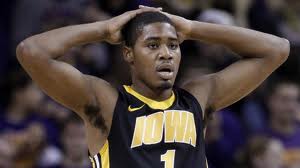 Coming off an upsetting loss up in Madison, this is exactly what the Iowa Hawkeyes needed.  It was a big home win in front of a big crowd, as usual.  Iowa also got lucky enough to have that game come against one of the worst teams in the conference in the Northwestern Wildcats.  Iowa won the game 93-67.

The Hawkeyes started off the game strong as they jutted out to a 10-0 lead just like that.  Iowa also grabbed 9 of the first 10 rebounds.  As the half wore on, Iowa continued to dominate.  Around the 8 minute mark, Mike Gesell hit a pair of three’s and Jarod Uthoff added one as well to ignite the crowd at Carver Hawkeye Arena.  As the half continued, everyone kept wondering when Melsahn Basabe would net his 7th point of the night.  That point was special because it would be his 1,000th point of his career.  Well, with 1:40 left in the half, Basabe stepped to the line for two shots and sank them both.  Giving him 1,000 for his career.

The second half was much of the same as the Hawkeyes continued to dominate on the glass, out in transition, and scoring the basketball.  Iowa was just the better team on this night and probably would be on most nights they play Northwestern.

A couple of Wildcats played with some foul trouble and two fouled out.  Sophomore center, Alex Olah fouled out with about 7 minutes left in the game and JerShon Cobb wasn’t too far behind.

Iowa was led by Aaron White who had 18 points, 10 boards, and 5 assists.  Melsahn Basabe also had a double double with 16 points and 10 rebounds.  Devyn Marble had a good night also, he had 15 points and 6 assists for the 20th ranked Hawkeyes.

Iowa will now turn to Sunday as they will have a tall task in front of them.  Fran McCaffery returns to the bench as the Hawkeyes head to Columbus to take on the 3rd ranked Buckeyes.