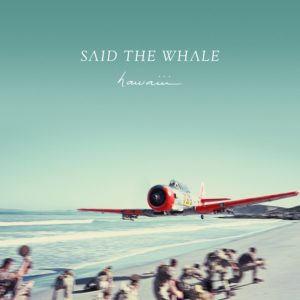 This week’s track of the week is, “Mother” by Said The Whale.

The track starts with light beats, along with lyrics suggesting that we are always trying to show a good image to others. Said The Whale is using  another way to express something young adults all have chances to face in college life, a turning point in life.

Said The Whale is an indie rock band from Vancouver,  which started in 2007. They started with releasing EPs, gaining popularity and then touring the US. They recently released their fourth studio album, Hawaii. This album consists different kinds of rock, either with light beats with acoustic guitar, or songs with soothing beats. However, just like the cover photo of the album, there are more light beat songs, and “Mother” is one of them. In general, this album gives listeners a feeling like they were in the countryside during summer time.

“Mother” is the second track of the album. Unlike the first track of the album, it brings a totally different style with fast and light beats which are also different from its lyrics. In this song, Said The Whale expresses that a lot of people are often trying to be gentle and tolerating what they do not really like. The lyrics reveal many youngsters are wondering about, wondering what they should  do. Should they act cool? Should they try to be a nicer person? Or they should just be who they are? Surprisingly, rather than singing in a rebellious way to express the lyrics, Said The Whale chooses a tender and easier way to do it.  Through “Mother”, Said The Whale showed listeners how two things that might have two different feelings can be amazingly be combined and made into a song.

Check out this song below, and buy their album on iTunes here.