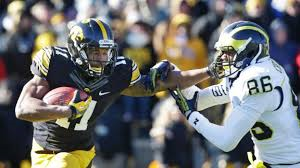 The Hawkeye’s 24-21 victory was built on a shaky offensive foundation. Jake Ruddock threw 3 interceptions and at times just could not show up against the Wolverines stifling defense. When the pass game didn’t work, the quick Michigan linebacker team and secondary gave Weisman a difficult time getting the ball anywhere early.

Good thing football is a 2-sided game, as the defense kept Iowa in reach of Michigan through 4 quarters. They didn’t allow the Wolverines to earn a first down until the second quarter, and killed any hopes of a run game, limiting the Wolverines to only 8 rushing yards and 11 passing in the first quarter.

A lot of this is thanks to strong play up the middle by Senior James Morris, who had a little insight on what kept the defense hungry. “We just had to work and to keep playing” said the senior.  Also, the entire Iowa secondary stuck to receivers, as Iowa’s pass rush game was at full effect, only resulting in one sack, but many hurried plays and a few tipped passes.

In the first half, the defense held Michigan within 11 but they buckled even more in the second half, limiting Michigan to only 45 yards. It almost seemed as every possession the Wolverines put up was a 3 and out.

This was key when the Offense looked to put the team back into the game, they relied on the defense keeping the game in reach while Ruddock, Tevaun Smith, and Weisman rallied late, to overcome a 11 point deficit and put the hawks up 3 with about 6 minutes to go.

The Wolverines tried to reply to Meyer’s field goal, and right when they started to get a drive going in Iowa territory, the defense took to the trend they had set throughout and forced a fumble that was the key turnover of the game, with 2 minutes left, the offense put together a drive and milked the clock to victory.

Head Coach Kirk Ferentz noted the defense’s tenacity. ”Our defense has really grown, did a good job of containing” said the head coach. “The linebackers were going hard the entire time”.

The Hawks almost tripled Michigan’s offensive output, and the defense’s hard hitting and total coverage of the option left the run game In trouble, while at the same time, the close coverage by the secondary and the pass rush Devin Gardener from getting too comfortable.

Ferentz called this “a team win” and he’s right, when one half of the team was having trouble holding on to the ball and composing drives, the other half stepped up in their place and kept them in until the offense woke up and delivered.

But Senior Linebacker James Morris put it best when he said “That’s football, you don’t know what aspects of the team are going to deliver, you gotta keep working, keep playing”. What James said was just what they did; a good team win thanks to the defense.