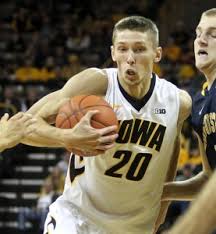 Jarrod Uthoff has had some nice games for the Hawkeyes early on in the season, but Friday night against Penn might have been the nicest.  Uthoff was instrumental in leading Iowa to victory.  Iowa defeated Penn by a score of 86-55.

The Pennsylvania Quakers actually held a couple leads early on in this ball game, as there were 7 lead changes, all of which coming in the first half.  As Penn started to turn the ball over more, Iowa turned those turnovers into points at the other end.  The Hawkeyes ended with 30 points off of turnovers compared to Penn’s 10.

Jarrod Uthoff was calm, cool, and collected throughout the entire ball game.  Uthoff ended the game with 19 points on 6-7 shooting including 1-1 from behind the arc.  “He’s got a really unique game, he has strengths in every area,” said coach Fran McCaffery about his 6’8″ sophomore.

Uthoff has shown the ability to get to the rim whenever he wants, defend, block shots, and shoot the ball from the outside.  Uthoff highlighted his night with a Blake Griffin like dunk along the baseline.  He was very modest about this incredible dunk after the game as he didn’t really have much to say on the subject.

Iowa took a 21 point lead into the half and seemed to be cruising to a victory at that point.  The Quakers came out of the locker room with guns-a-blazin as they went on a 7-0 run to start the half.  Iowa would soon regain its composure and never let Penn any closer than about 15 points after that.

Iowa’s length caused a lot of problems for the Quakers.  Devyn Marble, who is 6’6″ had 6 steals in the game, 4 of which came in the first half.  As a whole, Iowa turned Penn over 25 times.

Something worth mentioning was the brother match up that took place in Carver Hawkeye Arena.  Dau Jok, brother of Iowa guard Peter Jok plays for the Penn Quakers.  Early on it looked like Dau was pressing a little bit as he bricked his first 2 three point attempts.  After that, he never seemed to settle down.  Dau finished the game 0-6 from the field with all 6 shots coming from behind the arc.  His brother, Peter, finished up with 8 points on 2 of 4 shooting.

Iowa will now travel for the first time this year as they get set for the Battle 4 Atlantis tournament that will be played down in the Bahamas during Thanksgiving weekend.  Iowa opens up against Xavier on Thursday night at 7 p.m.