Iowa City was graced by the performance of electronic music producer and singer/songwriter James Blake on Saturday, November 16th at the Englert Theatre. The sold out show did not disappoint. The entire audience, including myself, was captivated from the second the Londoner began to perform.

Blake played fan-favorites, like “A Case of You” and “Limit to Your love”, both covers by Joni Mitchell and Feist, respectively. What makes him truly unique is the way he and his band come together to create an intoxicating experience with everything from vocal layers, dubstep beats, and more. The listening experience is just that: an experience that you will never experience again.

Together with his drummer, Ben Assiter, and guitarist, Rob McAndrews, the three played a set that stimulated the senses, possibly into overload—in a good way. The combination of lights and pulsating electronic beats during “Voyeur” made for a mid-set dance party.

It was no wonder he won The Mercury Prize for his second album, Overgrown, rewarding him for best British or Irish album of 2013. The entire crowd noted his inventive and poetic ways on stage, especially when he played his most popular song, “Retrograde.”

But James Blake saved the best for last with his solo performance of “Measurements” from his self-titled album, James Blake. His encore was somewhat of a religious experience that had the audience in dumbfounded silence. It was apparent he has matured exceptionally since the beginning of his career.  His soulful vocals pulled on the heartstrings of every person in the theatre. Well done, James Blake, well done. 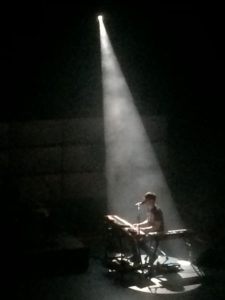