The University of Iowa women’s soccer team is usually getting ready to prepare for the end-of-the-season team banquet at around this time of year. This is typically a time when players, coaches, administrative staff, and families gather to remember the season that was and celebrate the season that has come to an end.

The Hawkeyes will instead be taking the practice field to start preparing for the first NCAA Tournament appearance in program history. The team learned their fate Monday afternoon while watching together in Carver-Hawkeye Arena, surrounded by plenty of staff from the athletic department. They will face off against Notre Dame in South Bend this Friday for their first round match up.

This news of making the NCAA tournament is just one of many records broken by the women’s soccer team this year.

Throughout the course of their preseason, conference, and postseason play, the Hawkeyes have accumulated 15 wins which surpasses the 13 they achieved in 2011. This makes for the most wins in a season, led by the winningest coach in school history Ron Rainey.

One of these victories came in a 3-2 victory at home against Penn State back on October 25. This win against the nationally ranked Nittany Lions was the very first in program history. The Hawkeyes then went on to beat them again to secure their place in the finals of the Big Ten tournament.

With an opening round victory against Michigan preceding their defeat of Penn State, the Hawkeyes set yet another record for the program. Although this was their third consecutive trip to the Big Ten tournament, the team had yet to make it past the first round. And here they were taking down two top 25 teams and landing themselves in the Big Ten Championship game against Nebraska where they suffered a tough 1-0 loss.

Now, with an NCAA tournament appearance on the horizon, the University of Iowa women’s soccer team has another chance to make history against the Fighting Irish that they faced earlier this year in a spring game. This is a special team that has surpassed the expectations of many, so there is plenty more history that can be made. 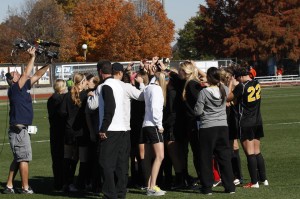