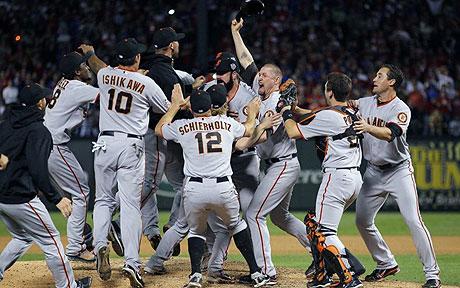 Where did January and February go? Who cares! March is one of the best months of the year for sport fans. We get to see the NCAA March Madness tournament that never fails to disappoint, winter hopefully decides to depart and most importantly, baseball. Spring training fills the month of March and leads us to opening day. To celebrate this exciting month, I will be publishing an article each and every day. Each day I will preview a different MLB team with whatever I deem relevant. On the last day of the month, I will finally reveal my 2015 MLB predictions. Let’s get this show on the road.

It only seems fair to start with the 2014 champs, the San Francisco Giants. The Giants have a certain beauty to them. They are a team that becomes one. People always seem to be surprised when a team like the Giants have such success. That’s called unselfish teamwork.

The Giants will enter 2015 with a few key changes. In the infield, the absence of Pablo Sandoval will not go unnoticed. Sandoval was a key contributor in each of the Giants past three playoff runs. In 154 postseason at bats, Sandoval holds a .354 batting average and a .545 slugging percentage. Casey McGehee will fill the spot at third base in 2015. McGehee played for the Marlins last season where he posted a respectable .287 batting average. There’s no question that this is a major downgrade.

The Giants will miss the switch hitting bat of Sandoval in the middle of the lineup. McGehee had two areas of concern last season. The first was the non-existent power. He hit only 4 home runs in 2014 and finished with a .357 slugging percentage. The Giants would love to see just 10-15 long balls from McGehee in 2015. It’s noteworthy to mention that he did blast 23 home runs back in 2010 when he finished with a .464 slugging percentage. The second area of concern is double plays. McGehee grounded into an MLB high 31 double plays in 2014. That’s almost twice the number of Sandoval who was doubled up 16 times last season. McGehee could be a difference maker if he could find a way to add some power to his stroke.

San Francisco fans should be excited to see Nori Aoki playing left field for the Giants this season. I think Aoki will fit well in the Giant’s system. He is a left-handed bat that managed to hit .285 in 2014 for the Kansas City Royals. The statistic that I find the most intriguing about Aoki is his batting average against left-handed pitching. He hit .363 against lefties last season with a .435 slugging percentage. Aoki should continue to be an exciting player to watch.

You could argue that Panik already broke out in 2014. He played 73 games for the big league club last season and posted a .305 batting average. Panik brings a quick left-handed bat to the lineup. He was another guy who crushed left-handed pitching last season finishing with a .373 batting average and only struck out 12 times against south paws. He struggled to find the gaps at home but managed to hit 8/10 doubles on the road. If healthy I’m expecting:

Cain is coming off of an elbow surgery that ended his 2014 campaign early. Cain has struggled in the past few season with ERA’s above 4.00. If Cain can give the Giants just 175 innings with a 3.67 ERA it could be the difference between October baseball or an early off season. He finished the 2012 season with a 2.79 ERA over 219.1 innings. The Giants will look for any help they can get with their aging rotation.

It’s hard to say that the Giants will be a great team but I’m certainly not ready to doubt them. They still have solid pieces in place.

Madison Bumgarner reassured everyone last year that he is a true ace who can carry a team through the playoffs. Bumgarner posted a 0.43 ERA in the World Series last season through 21 innings of work. He’s given the Giants four consecutive seasons of over 200 innings of work. Hunter Pence continues to be one of the most consistent outfielders in the game and has given no indication that would show any change. Buster Posey seems to get better every season and is the core of this talented team. With the key pieces still in tact, the Giants should be ready to contend for another NL West Title. 2015 should be a more challenging season due to the fact that the Dodgers still remain a major threat and the Padres have significantly improved.